IN THE NEWS: Delta Mayor (and ICBA) Keep Fighting For New Massey Bridge 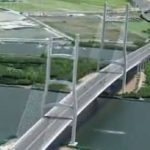 The Massey Tunnel replacement project is hanging by a thread after comments from the John Horgan-Andrew Weaver tag team yesterday. The two Victoria residents say the mayors of the Lower Mainland don’t want the bridge and therefore they’ll look to kill it.

Well, the mayor of the city most affected, Delta’s Lois Jackson, DOES want that bridge. So do the three MLAs just elected in Richmond, even though the Lower Mainland mayors claim Richmond will be overrun with traffic if the bridge proceeds. But in Horgan and Weaver’s world, the mayors of Vancouver, New Westminster and Port Coquitlam (none of whom ever travel through the Massey Tunnel at rush hour) know better than Delta’s mayor and Richmond’s elected MLAs.

Sorry, thousands of south Fraser drivers stuck in Massey congestion every day. Horgan and Weaver just aren’t that worried about you.

ICBA is. We’re going to fight to keep this project going. From today’s Delta Optimist:

Jordan Bateman, communications director for the Independent Contractors and Businesses Association, told the Optimist they found Horgan’s and Green leader Andrew Weaver’s comments discouraging, noting they appear out of touch with the situation on the ground.

“This is a tunnel that needs to be replaced. A lot of money has already been spent on improvements and to simply dismiss it out of hand because it was a B.C. Liberal project shows you that they are more interested in power than looking at issue-by-issue as they said before,” he said.

As for Horgan consulting with the other mayors, Bateman said, “”I’m not sure why they are taking the words of the mayor of Vancouver or New Westminster or Port Coquitlam over the word of the mayor of Delta. Even Richmond, the three ridings all went B.C. Liberal, and this was supposed to be the area that would be most negatively affected by a Massey expansion, which we know and anyone who lives south of the Fraser, as I do, is nonsense. John Horgan will listen to his NDP mayors I suppose, but not the one in Delta who has been championing this project for a long time.”

Bateman added Horgan and Weaver “snickered at blue collar workers in this province.”