All in the Family: Celebrating Longtime ICBA Member Frank Perizzolo

Earlier this year in Coquitlam, Frank Perizzolo, a longtime member of the ICBA family, celebrated his 70th birthday at a surprise event organized by his son Steve. 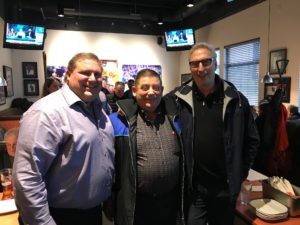 Frank started his company P & F Electric in 1986. He credits Mario Dallazana of Inlet Electric, his former employer, with helping him get a start on his own. Frank originally planned to start P & F with two other partners, but when the day came to sign the papers, the other two didn’t show up and the rest is ICBA history.

“I remember Frank as one of the strongest supporters of the apprenticeship training system,” recalls Gord Stewart, former VP of ICBA who attended the event. “I got to know him early in my days at ICBA when he would come in to register his apprentices and it really meant a lot to him to be giving people a start in the trades .”

P & F Electric took off under Frank’s blue collar work ethic and his son Steve joined the business in the 90s. Steve remembers longtime ICBA President Philip Hochstein signing him up as an apprentice and he went on to graduate as a Red Seal electrician at the tender age of 21.

In 1999, Steve, feeling the need to spread his wings a little started up his own firm NRG Electric, but was called back into P & F  in 2009 when Frank ran into some health issues. Since then, Steve has wound down P & F and concentrated on growing second generation ICBA member NRG Electric. Many of the original P & F employees made the transition from P & F to NRG which specializes in concrete and wood frame multi-family residential electrical.

And, like father like son, Steve takes special pride in training and supporting the apprenticeship system. “Just during my time, we have trained hundreds of apprentices,” Steve beams. “And we have taken at least 50 apprentices all the way from year one to Red Seal journeyman.”

Recently retired long-time ICBA President Philip Hochstein fondly remembers his days working with Frank. “He really personified the grassroots, family feel of the ICBA membership,” says Hochstein. “When Gord and I were talking about the issues that we should focus on, we often asked ourselves whether this was the kind of issue that would matter to Frank Perizzolo.”