BC Construction Monitor: Standing Pat is No Economic Vision for B.C.

Annual budgets are probably the truest measure of a gov­ernment’s priorities and vision, or lack thereof. The most recent B.C. NDP bud­get, passed with the help of the Greens, was widely characterized as a “stand pat” exercise – so much so that reporters didn’t have enough questions to fill their allotted time with the finance minister.

But it’s hard to square the outlook that underpins this budget with global economic trends. While we have enjoyed a lengthy period of economic expansion, a slowdown has already taken hold in China and Europe, and the predominant view among economists is that 2018 is likely to have been the economy’s high point for some time to come.
If ever we needed a focus on productivity, competitiveness, and maximizing the economic benefit from every public dollar spent, now is the time. Yet we saw none of that in the NDP budget. In fact, debt accumu­lation, spending and tax levels are all heading in the wrong direction and at a troubling pace.

Added burdens like these will be a further drag on already slowing investment, growth and job creation. The budget was frightening in acknow­ledging such an impact in the construc­tion sector – a projected 30 per cent drop in housing starts over the NDP’s term of office. Winter is coming, economically speaking, and NDP mis­management is going to make it tougher to weather the storm that is closing in.

The Debt Clock is Spinning Back Up

The absence of new taxes in the 2019 NDP budget had less to do with restraint, and more to do with the hikes and other added burdens that it packed into its previous two budgets and other measures. They included:

A new NDP payroll tax came into effect January 1, 2019 – the Employer Health Tax (EHT) – but the Medical Services Premiums (MSP) it’s meant to replace are still being collected this year. The budget confirms the cost impact for businesses, which in turn will have a chilling effect on jobs and investment. 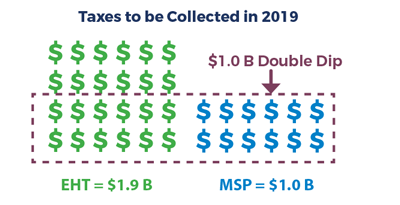 Since public sector employers pay the Employer Health Tax, municipalities will be looking for a way to re­coup it. You can probably look no further than your property tax bill to see how that will happen. 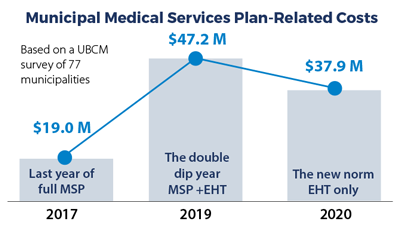 At a time when governments elsewhere are wisely focused on competitiveness and restraint, the B.C. budget includes a 10 per cent hike in its total spending over three years, amounting to $5.8 billion. The NDP Government has raised a tax or introduced a new tax once every 3.5 weeks since it was elected. 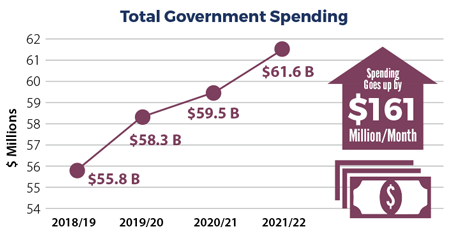 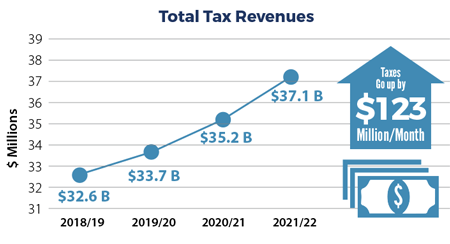 The NDP is planning on big debt increases. But overblown revenue expectations will probably make things even worse. The NDP are banking on a massive turnaround in the perfor­mance of two of the largest Crown corporations – a high stakes gamble that is likely to translate into serious rate increases. 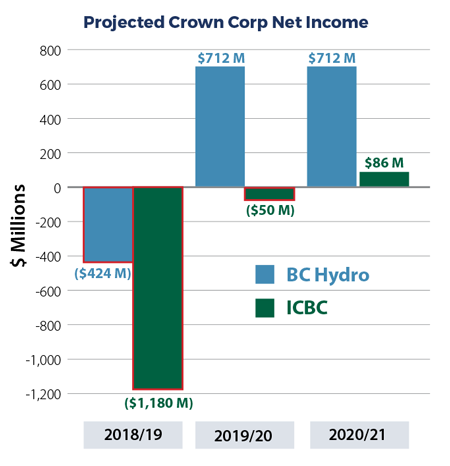 For the construction industry, the single most troubling number in the budget was the projected 30 per cent drop in housing starts. Given that construction accounts for nearly 10 per cent of the B.C. economy, this contraction will be widely felt. It underscores the flaws in an NDP housing strategy that’s based on higher taxes, with little regard for increasing supply, and casts further doubt on revenue projections. 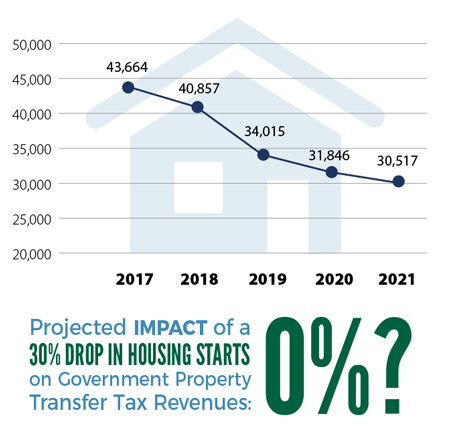 For all their big spending ways, the NDP couldn’t carve out a penny to begin several major and much­needed infrastructure projects. That’s due in part to massive over­payment for the work thanks to so­called ‘Community Benefit Agreements’ that exclude non­union labour. In addition to violating fundamental workers’ rights, these agreements will drive up labour costs by more than a third. 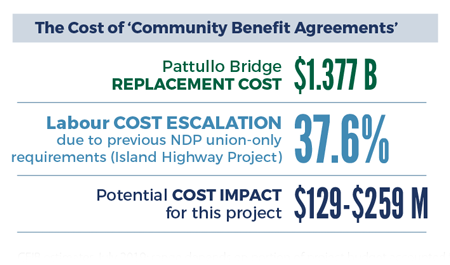 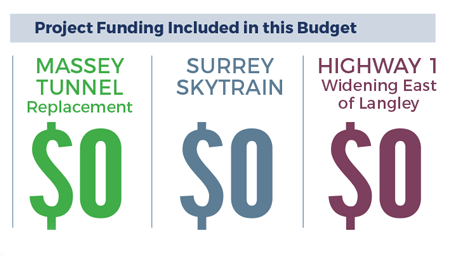 Successive B.C. governments have worked for years to bring an LNG industry to our province. The vision is to liquefy clean-burning B.C. natural gas – at newly built facilities with world-leading environmental practices – and to ship it to high-demand Asian markets where it will help offset heavier-carbon fuels.
That vision became reality last October when LNG Canada announced the go-ahead for a plant now being built in Kitimat.

The Fall 2021 ICBA Construction Monitor is out, and it looks at how the BC construction industry is handling the mental effects of the COVID-19 pandemic. Lots of statistics and facts that you may find surprising.One of the important measures in it is the increase in usage of ICBA Benefits’ Employee Assistance Program, which shows that our Wellness program is being successful in raising awareness of mental health — and that an EAP is a place to get help.See it all at www.icbaindependent.ca/wp-content/uploads/2021/10/ICBA-Fall-2021-Web.pdf ... See MoreSee Less

"It's impossible to judge which is the best approach to replacing the Massey Tunnel because the NDP don't want you to do that."The BC Government is hiding all the numbers that proves how bad a decision the NDP made in killing the 10-lane Massey bridge. ... See MoreSee Less

Opinion: It's impossible to judge which is the best approach to replacing the Massey Tunnel because the NDP don't want you to do that
View on Facebook
· Share

ICBA's Jordan Bateman joined Jim Goddard to discuss how the NDP government has added 58% more employees in just four years -- and the three shortages hurting small business: a shortage of labour, a shortage of supplies, and a shortage of smart economic policies from government. ... See MoreSee Less

TRAINING THURSDAY: Communication Skills (2 Gold Seal Credits)Tuesday, October 26th and Wednesday, October 27th, 2021Details/Register at: icba.simplesignup.ca/en/8914/index.php?m=eventSummaryThis course is designed to improve skills in communication for supervisors and management in the office and in the field. Participants will be able to identify and practice skills needed for effective communication and learn about barriers to communication. They will also learn about different communication styles and identify what their dominant style is as well as how to deal with people who have a different style of communication.The course material also provides insight about anger and how to manage it as well as help develop the skills required to supervise others.The course will also cover the following:Effective Leadership through Communication SkillsDealing with Difficult People, Conflict and ConfrontationAssertive Training and Speaking SkillsCommunicating MotivationCommunication through Body LanguageManaging a Good Impression to ClientsConstructive Use of Anger and Persuasion SkillsAnger and Conflict Management SkillsCommunicating Discipline and TerminationResolving Disputes through CommunicationHow to Prepare for and Facilitate MeetingsCommunication through Writing SkillsDrafting and Preparing Proper Reports and CorrespondenceCommunicating Teamwork to Staff and WorkersInstructor: Fazal Bhimji, Cert. ConRes, BSc, CMed, has been involved with conflict resolution since 1991. He is an active mediator/arbitrator, a Provincial Court Mediator and a member of several mediation rosters including the BC Mediator Roster Society (Civil) and the Public Service Labour Relations Board (Fed.). October 26, 2021 – 8:30 AM to 4:30PM (PST)October 27, 2021 – 8:30 AM to 4:30PM (PST)Details/Register at: icba.simplesignup.ca/en/8914/index.php?m=eventSummaryMissed this one? Check out icba.ca/courses for other times and options ... See MoreSee Less

This is a shocking number: Since the BC NDP took power in 2017, they've added 180,000 people to the provincial government payroll. That's an increase in government employees of 58% (from 310,000 to 490,000).For a private sector barely pulling itself up off the pandemic mat, this is a lot of extra government to be paying for... ... See MoreSee Less

Is gas really heading to $2 a litre in Canada?

Opinion: The Clean Fuel Standard is going to cost the average Canadian a pretty penny
View on Facebook
· Share

The Fall 2021 Construction Monitor looks at how BC construction is handling the mental effects of the pandemic.

Example: usage of ICBA Benefits’ Employee Assistance Program is UP 44%, which suggests our Wellness program helps awareness of mental health.

Our @jordanbateman spoke with @howestreet's @jimgoddard3 about BC's burgeoning payroll, and shortages of supplies, labour and government common sense.