ICBA MEMBERS IN THE NEWS: Metric Rebuilds BC Roads 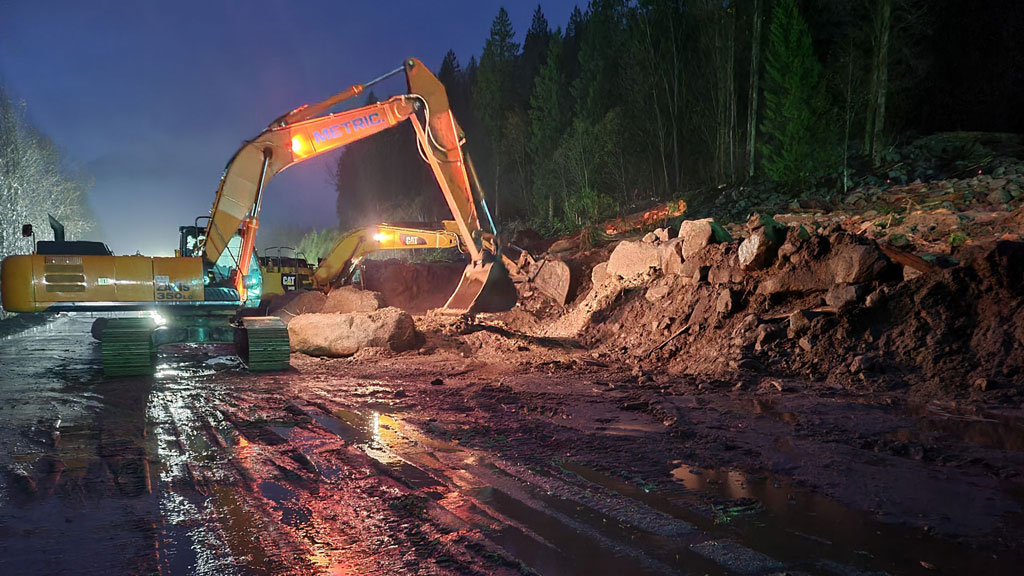 The following piece first appeared in the Journal of Commerce on Nov. 24, 2021. Metric Civil Contractors is an ICBA member.

One of the crews on the ground clearing roads and battling floods is Metric Civil Contractors, which serves all of Western Canada with its bases in Chilliwack and Kelowna.

Chris Veenstra, a principal and project manager for Metric, said his teams have been working for Emil Anderson Maintenance, the company tasked with maintaining many of the roads and highways in the Fraser Valley Regional District.

Metric’s work began early Tuesday (Nov. 23) when they were dispatched towards Cultus Lake to repair washed out culverts. Crews have been working on serious washouts and keeping them at bay near Chilliwack Lake Road. They have also been repairing shoulders and rerouting creeks.

Metric and others have also been co-ordinating work to clear Highway 1. After Emil Anderson and its crews got through a smaller slide to access a much larger slide, excavators, trucks and crews were immediately mobilized.

Crews were also about to get around Highway 3 where equipment was stuck via the Maple Ridge and Langley side.

“It was all hands on deck,” said Veenstra. “It has basically been non-stop since.”

Emil Anderson, Kiewit, Metric, Kemano Drilling and many others have been co-ordinating to make the highway safe and open. Metric’s team initially worked 12-hour shifts for 24 hours to help clear the path.

“They are all working alongside each other and work has not stopped,” he said, noting despite the urgency and national attention on the work, safety is the top priority.

“Obviously it is hard work and there is a lot of urgency, but it was important that the work is done safely,” he said. “At the end of the day that is the highest priority and second is getting the highway open.”

Veenstra explained unlike planned maintenance, repairing damage from a disaster is much more complex.

“It’s very different than a typical project we work on where everything is fully designed and engineered and where there is lots of time for planning, even down to ordering materials and co-ordinating trucks, co-ordinating crews, reviewing scope, reviewing schedules,” he said. “In this scenario, it can change by the hour. It is dealing with unknown conditions and you are trying to move equipment and crews and supplies on the fly. It is a much different situation, but it has been amazing to see how our crews have handled it and gotten it done as quickly as possible.”

Veenstra praised the crews that have been working long hours on the complex sites.

“The amount of teamwork in these extreme conditions has been amazing to watch,” he said. “It is not possible without the guys in the field. The equipment looks good in the pictures, but it’s the guys operating it getting it done.”

He hopes the attention crews and the highways are getting underscores the importance of B.C.’s infrastructure.

“I guess that it is unfortunate because of why it is being highlighted right now, but hopefully moving forward the general public will understand how important maintaining our public infrastructure is,” he said. “This work is reactive but moving forward there is more importance put on preventative maintenance of critical infrastructure. I think seeing what we are dealing with right now will change the perspective of the general public and the stakeholders who make those decisions.”

The province expects Highway 1 to reopen between Hope and Spences Bridge Thursday, Nov. 25, officials said, as crews have completed “critical temporary repairs.” Many routes remain closed or have restricted travel due to storm risks or damage. B.C.’s south coast is also bracing for more rain in the coming days. Environment Canada expects up to 80 millimetres of rain to hit the north shore mountains as well as the Fraser Valley.