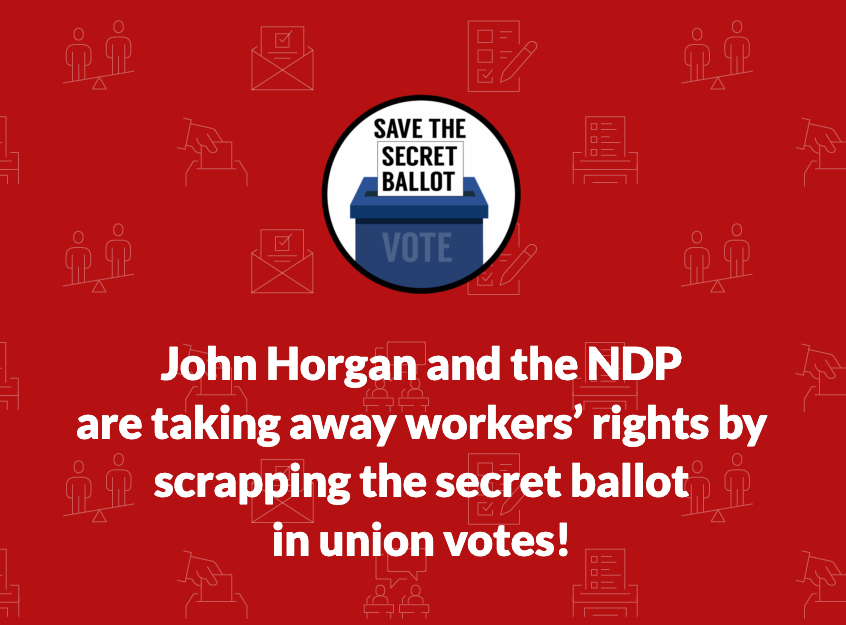 The following op-ed, written by Chris Gardner, President of the Independent Contractors and Businesses Association, was first published in the Prince George Citizen April 13, 2022.

It’s hard to imagine that in 2022 in British Columbia, we are facing the prospect of a government taking the secret ballot away from anyone, but the NDP is doing just that.

For the past two decades, the secret ballot for union certification votes has been the law in B.C. It ensures that neither employers nor unions coerce or intimidate workers when they are deciding whether to join a union. Votes are fair and supervised by a neutral party, the Labour Relations Board. If an employer interferes, the union is automatically certified – a strong protection against company intimidation. At the end of this process, both the employer and the union know the true desire of the workers.

But in a shocking move ripped from the 1970s Big Labour playbook, the NDP Government is now rolling out a “card check” system that is notoriously open to manipulation and abuse. Using the blunt force of their majority government, the NDP will strip away the best protection from intimidation granted workers in the workplace – the secret ballot.

In 2018, an independent panel appointed by this same NDP Government defended the secret ballot finding that it is “most consistent with our democratic norms, protects the fundamental right of freedom of association and choice, and is preferred.”

However, governments ignore the recommendations of independent experts when it suits them. Some might be wondering who was consulted. No entrepreneurs, job creators and no industry or business associations received a call. But surely the views of workers were taken into consideration? Again no.  Polling shows workers overwhelmingly favour the secret ballot – most workers, when given the choice, decide against joining a union.

Of B.C.’s nearly 250,000 construction workers, more than 85% of them are not members of a traditional building trades union. The percentage of workers unionized has been slipping for decades as workers embrace the opportunity of more flexible work arrangements and reject the rules and bureaucracy of a more confrontational approach to the workplace.

As we hopefully put COVID-19 behind us, one of the most important lessons we learned about today’s modern economy during the pandemic is that workers want greater choice and fairness. And, because of the worst shortage of people our economy has experienced in generations, the opportunities for workers are endless and wages and benefits have never been better – and they are going higher.

Killing the secret ballot is out of step with this new reality. The NDP Government talks a big game about an open, democratic workplace on the one hand, yet on the other they are taking the secret ballot away from workers. Someone in Victoria did not get the memo that unionization is a worker choice and not something dictated by government, unions, or employers.

Whether it’s when we elect governments or members to local community associations, it is the secret ballot we rely on to provide assurance that the vote is free from manipulation.  There’s a good reason that we don’t use a “show of hands” in important elections. Indeed, we elect high school councils and choose the winner of Canadian Idol through a secret ballot – working men and women deserve no less when they are deciding whether to join a union.

In 2013, one of the biggest unions in Canada, the Labourers’ International Union of North America (LiUNA), on its website highlighted the problems inherent in a card check system – union organizers make “false promises” and “misrepresent the facts.” It issued a strong warning to its members to not sign anything: “Don’t be tricked.” This is the system for union certification votes that the NDP Government wants everyone to embrace.

In public policy, there is often a lot of grey. However, this move is clearly wrong. And, because the secret ballot goes to the core of our democracy, taking it way erodes our democracy and may well be one of the most offensive policies this government will ever enact. The NDP Government is set to steam roll over the rights of workers and in the process toss out every ballot box in every workplace in this province, all in the name of workers they pretend to be protecting. Really?

Make your voice heard — tell John Horgan to save the secret ballot by filling out the form below: