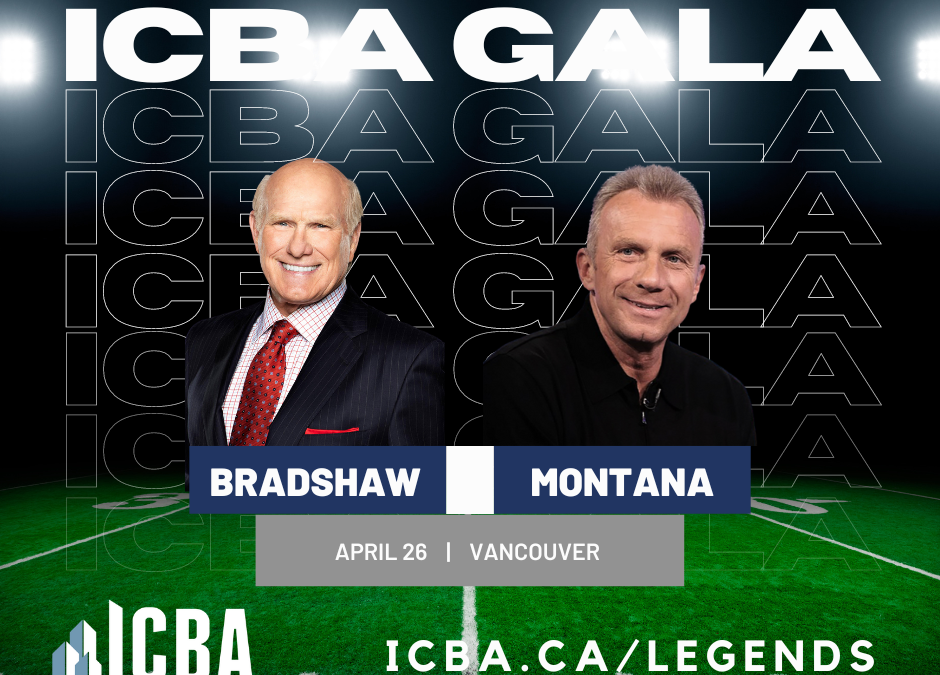 “Bradshaw and Montana are two of the most exciting players in NFL history, with Super Bowl success matched only by Tom Brady,” said Gardner. “To have them together on our stage will be an outstanding experience – we can’t wait to hear their stories of success and perseverance.”

The ICBA Gala will be held on Wednesday, April 26, 2023, at the JW Marriott Parq Hotel in Vancouver.

Combined, the two NFL Hall of Famers have won 8 Super Bowls, 3 season MVPs, and 5 Super Bowl MVP awards. They each authored a signature throw that lives on in football lore: for Bradshaw’s 1970s Pittsburgh Steelers, it was the Immaculate Reception; and for Montana’s 1980s San Francisco 49ers, it was The Catch.

Bradshaw has been a host on FOX NFL Sunday for two decades and acted in several movies. In recent years, he has also shared openly about his struggles with mental health and has recently overcome two different types of cancer.

“Terry Bradshaw is a formidable champion, the ultimate survivor, and an incredible entertainer,” said Gardner. “His work to break the stigma around mental health in professional sports and other masculine-dominated industries is inspiring. He has that rare gift of being able to connect with his audiences emotionally.”

Montana, nicknamed Joe Cool for the clinical way he carved up opposing defences, has generally stayed out of the public eye since retiring, while doing significant charity work with the Make-A-Wish Foundation.

“For a generation, Joe Montana has been the gold standard of how to perform under intense pressure,” said Gardner. “He never lost a Super Bowl game and launched the 49ers dynasty; it’s impossible to tell the story of the NFL without spending a lot of time talking about Joe Montana.”

Since 2017, the ICBA Gala has become the can’t-miss networking event and celebration of what the men and women working in construction do every day to build B.C., with nearly a thousand people gathering in Vancouver annually.

Tickets went on sale last month to ICBA members, and hundreds have already sold. A small number of tickets are available to the public starting today, Monday, Dec. 5.

Visit icba.ca/legends to get tickets.