A balanced and realistic energy future

We get and use our energy in very different ways today than we did just a decade or two ago. But does that mean we’re on pace to make the changes we need to, or should we be trying instead to end fossil fuel use as completely and quickly as possible?

The federal government has clearly signaled that it foresees a long-term transition away from fossil fuels: One that will involve continued carbon-reduction, as well as new infrastructure to get responsibly produced conventional energy to world markets where the long-term demand outlook is strong.

Demand growth will be driven by an expanding global population, and a determination on the part of developing countries to improve their living standards. It’s true that renewables are poised to make up a much bigger part of the energy mix. But they’re starting from a low baseline and won’t be able to fully meet demand without more modest but still significant growth in conventional energy sources as well.

Even putting demand growth aside, a quick and complete transition to renewables is simply not viable. Their costs are coming down, and technical challenges such as the irregular availability of sources like wind are being tackled. But these remain big hurdles. Carbon-free energy sources can also have significant ecological footprints of their own.

Fortunately, renewables are one tool among many in meeting our climate change goals. Ongoing improvement in energy efficiency is actually the single most important tool. There’s also huge potential to capture and store carbon. And making more use of cleaner burning fuels like natural gas will also have a cooling effect.

Our energy transition needs to continue. But conventional energy sources will clearly fuel human progress for a long time to come. And that opens the door to continued Canadian leadership, both as a supplier of responsibly produced conventional energy, and as an innovator in renewables and other fields that need to be part of a balanced global energy strategy.

The world’s population is growing. And better access to energy, often in basic forms like clean and safe cooking fuels, is vital to lifting more people out of poverty. Even with more renewables and energy efficiency, rising global demand means we’ll need to rely on conventional energy sources for a long time yet. Fossil fuels provided 84% of the world’s energy in 2012, and are projected to provide 78% in 2040. 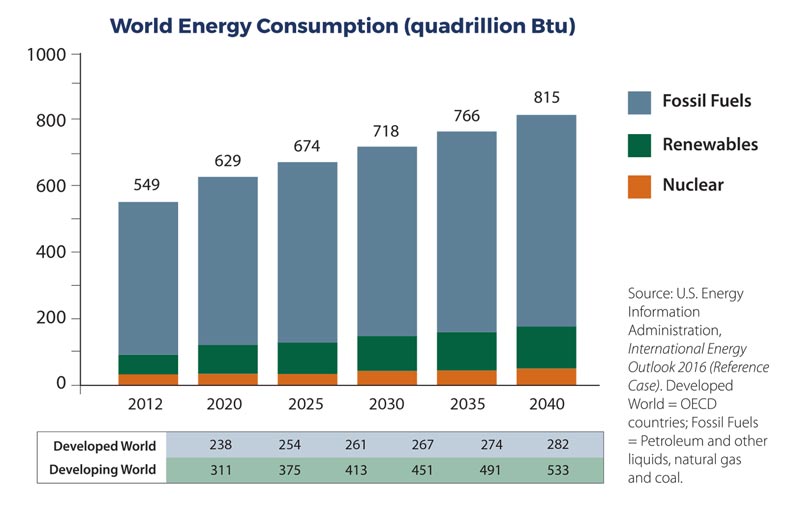 The Energy Transition Is a Long-Term Play

Renewables: Huge promise, but a work-in-progress

Renewables are the alternative most often pointed to by those who think we should be able to cut ourselves off fossil fuels right away. Renewables are vital to the transition to cleaner energy, and they are growing fast. But various challenges mean the ramp up to larger-scale use will be gradual.

The costs are high 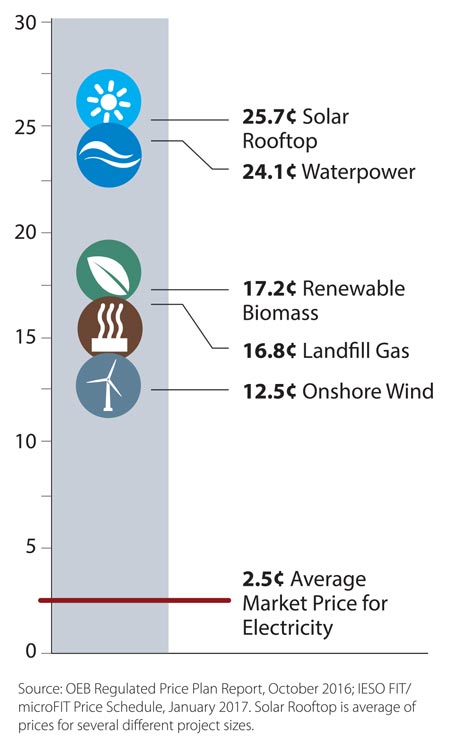 Renewables are getting cheaper but are still expensive. In its aggressive push to promote renewables, Ontario is offering generators prices that are often vastly higher than average market prices. This has contributed to strong pushback on energy costs and widespread concern with “energy poverty”.

The sun can’t shine every day

Renewable energy is intermittent – often most available when least needed – and widely dispersed. So it’s very challenging to integrate into electricity grids without hurting reliability. And with the current state of energy-storage technology, renewables need to be backed up with standby conventional generation.

They have their own footprints

Renewable sources are low carbon, but they have their own environmental footprints. Sources such as solar energy, for example, take up a lot of space relative to the energy they produce. Consider the example of Kingston Solar, a 425,000-panel project in southern Ontario that recently secured financing. 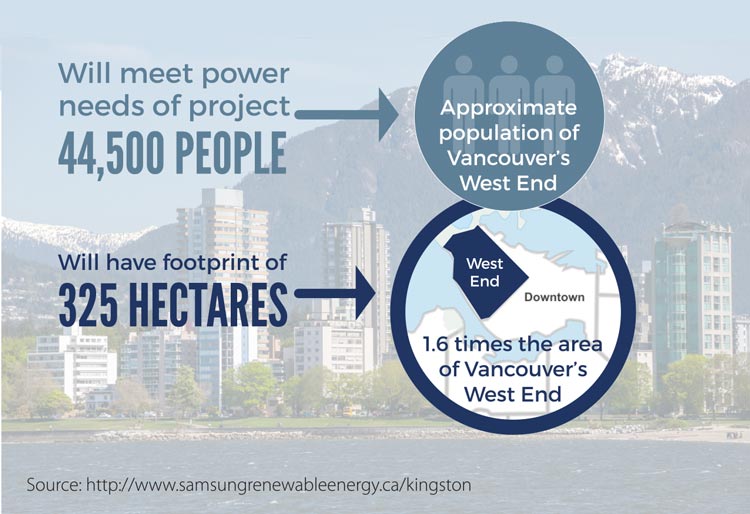 Lowering the temperature in diverse ways

Continued use of fossil fuels doesn’t mean giving up on dealing with climate change. A recent international agreement commits countries to work to keep the average global temperature increase to below two degrees, instead of the four-degree increase many believe we’re headed for. This is an International Energy Agency projection of the combination of approaches that could achieve that: 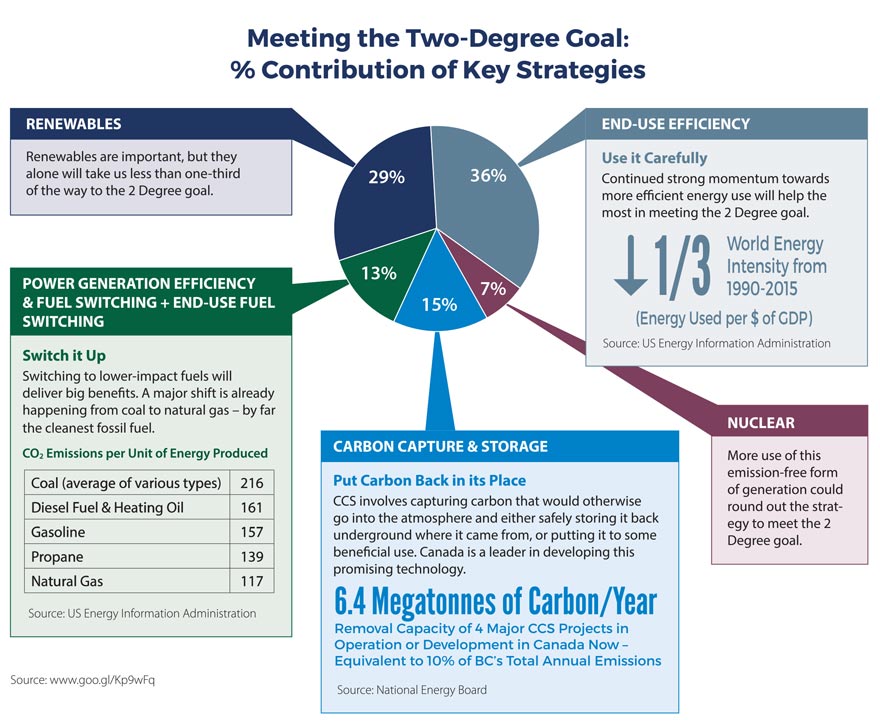 Canada is an energy economy

With a clear global need for continued use of conventional energy for decades to come, there’s no reason for Canada to give up on developing its oil and gas resources – especially since we insist on high standards on carbon management and environmental performance. And the social and economic consequences for our country would be severe if we did give up on these resources. 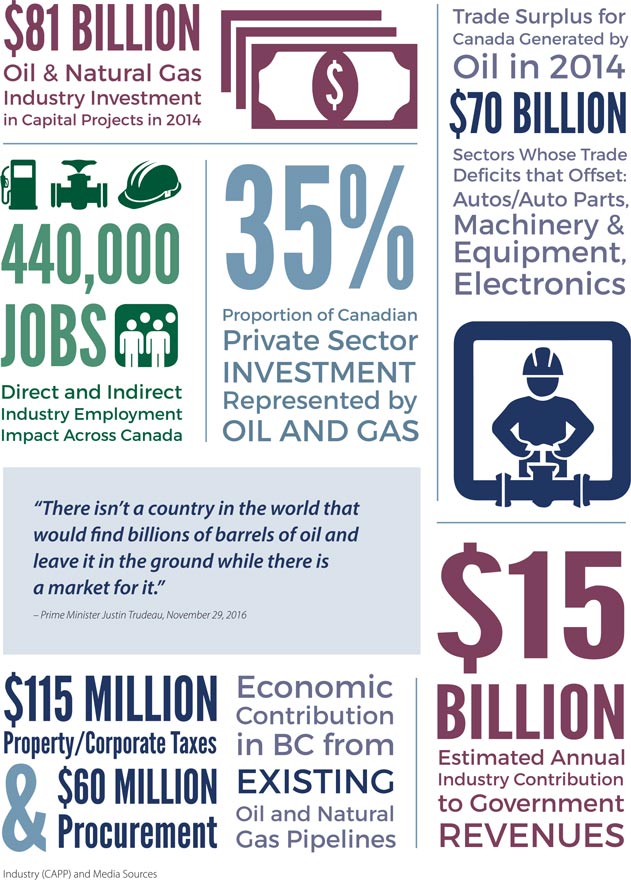 The BC Construction Monitor is an ICBA publication providing ahead-of-the-curve information and statistics on the BC construction industry and issues relevant to it.

The Monitor draws on analyses and outlooks from various sources, and provides current and substantive insight. This regular publication is intended for industry executives, government decision makers, journalists, and other opinion leaders.

You can receive the Monitor in print or digital formats, and let us know if you have colleagues who would also be interested in it. We also welcome your feedback and story suggestions. Please email us at info@icba.ca.