IN THE NEWS: ICBA Opposes Plan for More Red Tape at NEB

The Trudeau Liberals are pondering what to do with the National Energy Board, and are asking for public comment on some recommendations from a panel. 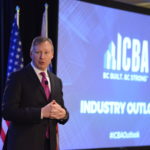 Bluntly, these recommendations would add years, countless staff and acres of red tape to the already difficult process of getting a responsible resource development approved. The solution to bureaucracy is NOT more bureaucracy. While the rest of the world rockets ahead on oil and gas deals, Canadians are navel-gazing and bogging the process down.

ICBA President Chris Gardner addressed some of these concerns in a recent Daily Commercial News article:

His fear is that the changes will make a long, complex process even longer and more complex, which would have a chilling effect on the economy and investment. He noted that the approval process for the Site C Dam project took eight years and the process for the Trans Mountain Pipeline Expansion has been going on for around five years.

“We need to ensure that when projects are fairly and appropriately reviewed, and they have been approved, they move forward,” he said. “And if not, we need to say ‘no’ and move on.”

He added that moving the process closer to Ottawa was confusing as it implies that an agency in Vancouver or Regina or somewhere else wouldn’t be equipped to make a decision the same way those physically closer to the federal government could.