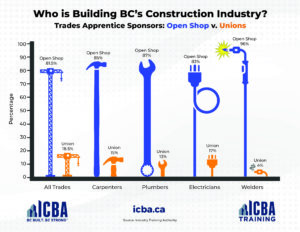 BURNABY—Non-union construction companies sponsor four times as many trades apprentices as unions in British Columbia, according to documents obtained from the provincial government’s Industry Training Authority through a Freedom of Information request.

“The numbers thoroughly debunk the building trades unions’ myth that only they train construction apprentices,” said Chris Gardner, president of the Independent Contractors and Businesses Association (ICBA), which represents more than 2,100 of these open shop companies. “In fact, it’s open shop companies which do the heavy lifting of recruiting, training, equipping and sponsoring trades apprentices in this province.”

While ICBA is proud to be the single largest sponsor of trades apprentices in B.C., with more than 1,100 registered, this is just a slice of the more than 23,000 sponsored by non-union companies.

In many trades, the percentage of open shop apprentices is even higher:

“Over the past 35 years, the building trades unions have lost market share, lost any wage and benefit advantage they used to have, and alienated generations of B.C. construction workers,” said Gardner. “Rather than truly represent the best interests of workers, the building trades unions are focused on saving their failing business model and are relying on NDP government-ordered union monopolies on taxpayer-funded projects in a bid to remain relevant.”

“The same unions who claim B.C. has a huge worker shortage and constantly fear-monger about foreign workers taking jobs from British Columbians is shipping B.C.-trained plumbers and electricians halfway around the world,” said Gardner. But where the building trades unions have failed B.C. workers and the construction industry, ICBA, open shop and progressive labour organizations have more than picked up the slack, Gardner said.

“Workers want choice, flexibility and opportunities to grow and succeed, that’s why non-building trades construction contractors are growing,” said Gardner. “It’s hard to find innovation and new approaches to work in 1970s style union hiring halls where union organizers tell you when, where or even if you can go to work in the morning.”

Click HERE for an infographic illustrating the statistics above.

Click HERE to read an op-ed from Chris Gardner on these trends. This op-ed is available for media outlets to publish, free-of-charge.