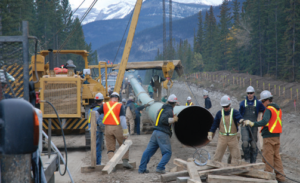 BURNABY – The federal government’s announcement today that the Trans Mountain pipeline expansion project (TMX) has been greenlit is excellent news for the thousands of construction workers waiting to get to work on it, says the Independent Contractors and Businesses Association (ICBA).

“TMX has seen many twists and turns along the way, but we are happy and relieved that construction has been given the green light,” said Chris Gardner, ICBA president. “This much-needed expansion should have started years ago, but was stalled by an obstructionist court action by B.C. NDP Government, the purchase of the pipeline by the federal government, and U.S.-funded professional protesters fighting it, even as polls showed the majority of Canadians supported the pipeline. It’s time to build this pipeline and secure the investment, jobs and opportunities that will be an important part of Canada’s long-term prosperity.”

ICBA led the fight for the Trans Mountain pipeline project for several years, using its #Get2Yes platform to generate thousands of messages from British Columbians supporting the expansion; created an award-winning Get Canada’s Big Gas Moving video viewed 800,000+ times on Facebook; encouraged BC construction companies to participate in the planning, bidding and eventual construction of the project; intervened in various hearings and court challenges; provided public policy and advocacy support; and was a founding member of Confidence in Canada.

“We have been proud to champion this nation-building project from the very beginning and will keep on working to ensure Canada’s energy industry has the workers, infrastructure, support and approvals needed to be successful,” said Gardner. “It is impossible to overestimate how important responsible resource development is to our economy and to Canada’s ability to attract investment and create opportunities for hundreds of thousands of families across our country.”

Despite today’s welcome news, there remain dark clouds on the horizon for Canada’s energy industry and threats to Canada’s ability to compete globally.

“Bill C-48, the Trudeau government’s north coast tanker ban, combined with Bill C-69, which will make it virtually impossible to get another major energy infrastructure project approved in Canada, are a one-two punch that will put Canada’s energy sector on its knees,” said Gardner.  “Through regulation and red tape, the Trudeau government’s aggressive attacks on the oil and gas sector are doing significant damage to Canada’s reputation as a place to invest and do business with confidence and certainty.”

“We cannot allow Trans Mountain to be the last energy project built in this country. Holding one of the most important drivers of our prosperity hostage makes no sense – through confusion and complexity, we are scaring away investment and opportunity not attracting it,” said Gardner.

“Over the past few years, Canada has lost billions of dollars in jobs and opportunity as our energy sector has been hollowed out. We have put at risk an entire industry and the family supporting jobs it provides in thousands of communities across Canada.”