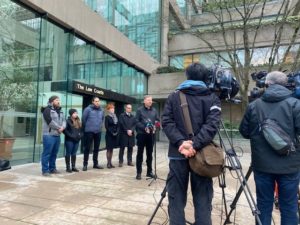 The NDP government’s labour framework, devised for the sole purpose of benefitting its Building Trades Union (BTU) cronies, violates the rights of 85 percent of B.C.’s construction workforce and should be declared unconstitutional, according to a coalition of British Columbia’s largest construction associations and progressive unions. Today the B.C. Supreme Court began hearing the coalition’s case to have the government’s labour deal struck down.

“The Horgan government will stop at nothing to pay back its building trades union supporters, even at the expense of shutting 85 percent of the province’s construction workers out of taxpayer-funded projects,” said Chris Gardner, President of the Independent Contractors and Businesses Association, whose 2,300 member and client companies employ more than 75,000 people. “This kind of blatant favouritism is offensive and costs workers and construction companies a fair shot at work on taxpayer-funded projects.”

“The Horgan government seems to have no problem violating workers’ basic rights, including freedom of association,” said Ryan Bruce, B.C. Manager of Government Relations for CLAC, which represents over 14,000 workers in BC, who will be forced to change their union membership to work on certain public infrastructure projects. “No government should be allowed to dictate which union workers should belong to.”

In order to build certain public projects, non-BTU workers must put their pensions and benefits on hold and pay dues to the Building Trades Unions, who constitute just 15 percent of the province’s construction workforce.

“This is not a government that stands up for worker rights, not when it freezes workers out of public projects,” said Dave Fuoco, a CLAC member with over 40 years’ experience in the construction industry. “The Horgan government shouldn’t wait to be told to scrap its lousy labour deal.”

“Forced unionization of this sort is an affront to one of the core values of the labour movement:  a worker’s freedom to choose.  Ironically, it’s a government who claims to be in touch with the working class that is denying workers this fundamental right,” said Ken Baerg, CWU Director of Labour Relations, one of the progressive unions challenging the provincial government’s Community Benefits Agreement (CBA) in court.

“It’s unfortunate that it takes legal intervention in order for the Horgan government to do the right thing,” said Paul de Jong, President of the Progressive Contractors Association of Canada (PCA). “This labour arrangement is unfair, unethical and unconstitutional and should be quashed.”

“As an association that represents both union and open-shop  companies, we know this government policy not only shuts out the majority of the construction workforce but also offloads significant risk to contractors,” added Fiona Famulak, President of the Vancouver Regional Construction Association “This, together with the bureaucracy  that’s been created to administer this antiquated labour model, unnecessarily inflates the cost of public projects by tens of millions of dollars that ultimately will be paid for by B.C.’s taxpayers.”

“This CBA policy places added stress on a vital industry that is already facing serious challenges to its future limiting innovation, driving up costs and stifling the naturally occurring community benefits that this new policy chooses to ignore,” said Chris Atchison, President of the BC Construction Association.

The B.C. Supreme Court will hear the coalition’s challenge of B.C.’s labour framework on February 3 to 7, 2020.

CONSTRUCTION MONITOR: NDP Burdening the B.C. Economy, When We Can Least Afford It
ALERT: ICBA is Moving to Surrey
ICBA OP/ED – Construction Essential to Public Safety