This op/ed by ICBA President Chris Gardner first appeared on The Orca.

It’s a story that may have got lost in the buzz of celebrating a new year: the B.C. economy shed another 7,700 jobs in December. That was the sixth time in seven months that B.C. lost jobs. 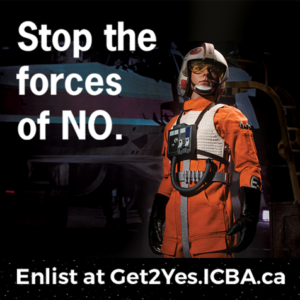 There are plenty of NDP government policies that can be blamed. Adding nearly $6 billion in new taxes has made it more expensive for BC businesses to employ people and to compete. Throw in the NDP’s lukewarm (and often conflicting) stances on major resource development, freezing 85 per cent of construction workers out of the tendering of public construction projects, and adding more red tape and cost to employers – jobs are bound to be lost.

Unfortunately, City Halls are no slouches when it comes to squandering opportunities to build vibrant thriving communities, whether through glacially slow approval processes, suffocating bureaucracy, or outrageous business property tax rates. Vancouver City Council’s 7 percent tax increase is a slap in the face to residents working hard to get by in one of the most expensive cities in the country.

Another problem is the District of North Vancouver, which continues to defy common sense as it careens from one ridiculous decision to the next. Case in point: a 27-acre site on its waterfront currently houses a private marina, some self-storage, and a concrete plant. Combined, this activity generates less than one job per acre.

When the site went up for sale in 2017, Wesbild looked at the employment potential of the site, purchased it, and put together a visionary, modern, jobs-driven plan for it.

This is not a Coal Harbour situation where employment land has been converted to homes. Wesbild’s vision is to maximize jobs by building modern industrial sites. Wesbild proposed to keep the marina and self-storage, and then build for small and medium-sized businesses struggling to find local industrial properties where they can set up shop, grow, and create local jobs on the North Shore.

It’s desperately needed, with local industrial vacancy rates now below one percent. The resounding and discouraging ‘no’ from the District was bad enough. What was worse was dragging the process out for months and ignoring the timelines they promised.

No wonder local lease rates for small businesses are one-third higher in North Vancouver District than the Metro Vancouver average.

The Wesbild proposal would have created as many as 1,000 jobs on site, and generated a billion dollars in positive economic impact. One of the innovations Wesbild planned was an on-site daycare where children would be cared for near their parents’ workplace—a phenomenal worker recruitment and retention tool.

Here’s the kicker: the Wesbild proposal fits with the current zoning, so no rezoning was necessary. Still, the district said no. If a land owner cannot depend on cities sticking to their own plans, land rights are being taken away.

By dragging out the process, and then killing Wesbild’s proposal, district council are sending exactly the wrong message and managing to accomplish something rather rare – fail local small business, local investors, and local residents in one fell swoop.

No one should be surprised. After all, this is the same council that shot down an 80-unit affordable housing project proposed by Catalyst Community Developments Society and a 100-unit project planned by Hollyburn Family Services. All the units in both projects were to be offered at below market rates to provide desperately needed housing for low income seniors, families and youth.

A dysfunction has settled into our local governments that is leading to serious economic failures, stifling the creation of family supporting jobs and distorting our local housing market.

With taxes out of control, red tape growing faster than it can be printed, job numbers falling, affordability going in the wrong direction for young people, we need more ideas like Wesbild’s – not fewer – and more than ever, we need bold visionary leadership at City Hall.

If we do not get more responsible decision-making from local government, the risk of failing an entire generation of young people seeking local jobs and affordable housing will become a harsh reality.