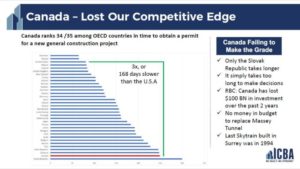 It’s a powerpoint slide I often show in ICBA meetings, and it always draws an all-too-knowing groan from listeners: Canada ranks 34 out of 35 OECD countries in the length of time it takes to get a general construction project approved. It’s a telling and embarrassing statistic for a G7 economy.

It takes nearly 250 days to get a permit in Canada – three times (168 days) longer than our competitors in the United States. In the OECD, only the Slovak Republic takes longer to approve construction projects.

A dysfunction has settled into our governments that is leading to serious economic failures, stifling the creation of family-supporting jobs, distorting our local housing markets, and making it nearly impossible to get the kind of infrastructure built that we need to increase our competitiveness.

Canada is now being labelled a place where it is simply too difficult to get things done, or worse, a place where regulatory approvals are not worth the paper they are printed on. The result: businesses and investors taking their ideas, their people, and their capital elsewhere.

Over the past two years, some of the largest energy companies in the world have passed over Canada for more investor-friendly jurisdictions. The cost to Canada has been, according to RBC, more than $100 billion in lost investment and tens of thousands of lost jobs.

Delays add direct financing costs to builders which are passed along to owners, which are either taxpayers, home buyers and end-users. It also slows investment, job creation and construction work by making the process unnecessarily confusing and complex.

It’s not just the private sector that suffers. The delays caused by more red tape, the demands to try and please absolutely everyone who has an opinion on a project – whether a genuine stakeholder or not – and the reluctance of politicians to make tough decisions, have significant implications for government projects too.

Think of the process involved in building the Site C clean energy project in northeastern B.C. It was April 19, 2010, when then-Premier Gordon Campbell decided to move forward with Site C, owned by the province’s electrical utility. He hoped to have it up and running by 2020.

But it took nearly five years to finally get all the permits and permissions to start construction. Then it got bogged down in court. By the May 2017 election, more than $1.75 billion had been spent, and the 2020 completion date was distant memory.

When the BC NDP government took over, they delayed Site C further with yet another review. Now completion is expected in 2024 – at a price tag far higher than originally expected at a time when BC prepares for more electrical demand form vehicles, home heating, LNG plants, and other uses, as we transition (slowly) from fossil fuels. And, this was a clean energy project.  Traditional industrial and responsible resource development projects such as Energy East, Northern Gateway, LNG Canada and Teck’s Frontier project face almost insurmountable opposition.

Obviously Site C is a larger, more complex project than what governments usually build. But even small projects are being delayed by unnecessary red tape and politicians’ fear of making decisions. It can take more than a year for communities to do even a simple project like install speed bumps in school zones, as consultation processes drag on and on.

The BC NDP took power in 2017 in part due to a promise to eliminate school portables in Surrey, the province’s fastest growing city. Three years later, there are more portables than ever.

The Horgan Government also promised to build 114,000 units of affordable housing, mainly in the Lower Mainland. Three years later, they have delivered less than 2 per cent of that total, and their municipal affairs minister lists slow permitting processes as a reason why.

Community centres, road upgrades, sewer plants, schools, hospitals: even minor delays on these projects end up costing taxpayers money and longer-than-necessary inconveniences. It’s time all orders of government have a long conversation about how to speed up construction permits – the problem has become too expensive to ignore.

Whether it’s a new seniors centre, a townhome complex, high-rise or a new road, as soon as a project is proposed the forces of “no” rally for the status quo and “more consultation.” Traffic, noise, views and quality of life are trotted out at council meeting after council meeting wrapped up in a dystopian narrative that sends local councils running in full retreat.

In the middle of a full-blown housing affordability crisis, one might think city halls would be focused on increasing supply, reducing red tape, and making it easier to bring housing stock on the market faster in an effort to reduce the pressure on the prices of homes.

However, in communities across B.C., local councils make decisions every week that makes it more difficult to buy affordable homes. They impose red tape and regulations that make it harder and more costly to build homes. It is a fact that in many communities, it now takes longer to get a project approved and permitted than it does to build it. This is a stunning indictment of the ability of unchecked local councils to make life more unaffordable for homebuyers.

If we do not get more responsible – and faster – decision-making from government, the risk of failing an entire generation of young people seeking local jobs and affordable housing will become a harsh reality.