OP-ED: Time for Canadian Energy Backers to Quit Being So Bloody Polite

The following op-ed, by ICBA VP-Communications Jordan Bateman, first ran in The Orca on March 6, 2020.

American groups funding eco-activists opposed to Canadian oil and gas got their money’s worth out of “My Sea to Sky” late last year. That’s my takeaway from an analysis by Greg Gutowski of regsync.ca. 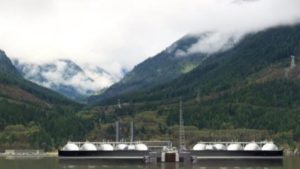 Gutowski looked at the 2019 public comment period for the environmental assessment of Woodfibre LNG’s request for a “floatel” – a floating hotel that would house up to 600 workers during construction of the LNG operation. Woodfibre proposed the floatel after Squamish residents and business owners raised concerns that workers could tie up Squamish’s limited hotel room supply during key tourism periods.

A Facebook group called My Sea to Sky held a protest the day the consultation launched, and local media reported 30 protestors outside Squamish Municipal Hall.

But that protest was more show than go: in the first 18 days of consultation, only one negative comment was sent to the EAO, while 105 submissions supported the floatel.

Throughout the consultation process, support letters came in steadily and were far ahead of the opposition.

With just four days left, My Sea to Sky went to work online. They ran social media posts, spent money advertising them, and used some outrageous fear tactics. One ad said, “Imagine what Squamish will be like if 600 cashed-up, mostly male workers that don’t have a connection to our community come into town?” The ads linked to a 1,920-word form letter they wanted people to sign and send in.

In a way, you have to tip your hat to My Sea to Sky, which has collected money from Patagonia, the Environmental Dispute Relief Fund (West Coast Environmental Law), the San Francisco-based Gordon and Betty Moore Foundation, the Tides Foundation, and the Rockefeller Foundation. They manufactured the appearance of deep public concern with just moments to spare.

But the bigger picture is worrisome: should an American-funded “advocacy” group be allowed to skew our public input consultations like this? Gutkowski noted that Woodfibre has actually consulted with My Sea to Sky more 500 times – more than any other impacted group, Indigenous community, regulator or government agency. That’s an incredible amount of time and effort spent by Woodfibre to try and ease the concerns of a group created and funded to oppose them. And still My Sea to Sky resorts to fear mongering to try and get their way.

Woodfibre LNG didn’t try and torque public consultation, and support for their proposal came in organically and steadily (The floatel proposal, by the way, is still under review by the EAO.)

Another interesting piece of analysis from Gutkowski were two word clouds, made up from submissions in favour and opposed. Those in favour used generally on-topic words like “housing,” “accommodation,” “construction,” “floating,” and “communities.”

Those opposed?  They preferred “fracking,” “fossil,” “emissions,” and “impacts” – real and imagined concerns that are more broadly connected to the project, and not the floatel under review.

The moral of the story? Canada’s oil and gas supporters are going to need to quit being polite and instead play by the same rules as their US-funded opponents. And the silent majority in favour of economic growth in this country need to speak up.

Let's hope version 3 of the NDP Government's small business relief program actually does what it's supposed to do: help entrepreneurs survive this recession! ... See MoreSee Less

The B.C. government has eased the eligibility requirements and extended the deadline for small and medium-sized businesses applying for funds under its $345-million pandemic recovery grant program.
View on Facebook
· Share