OP/ED: ICBA’s Jordan Bateman Wonders Why the BC NDP Prefers Some Hostile Takeovers to Others 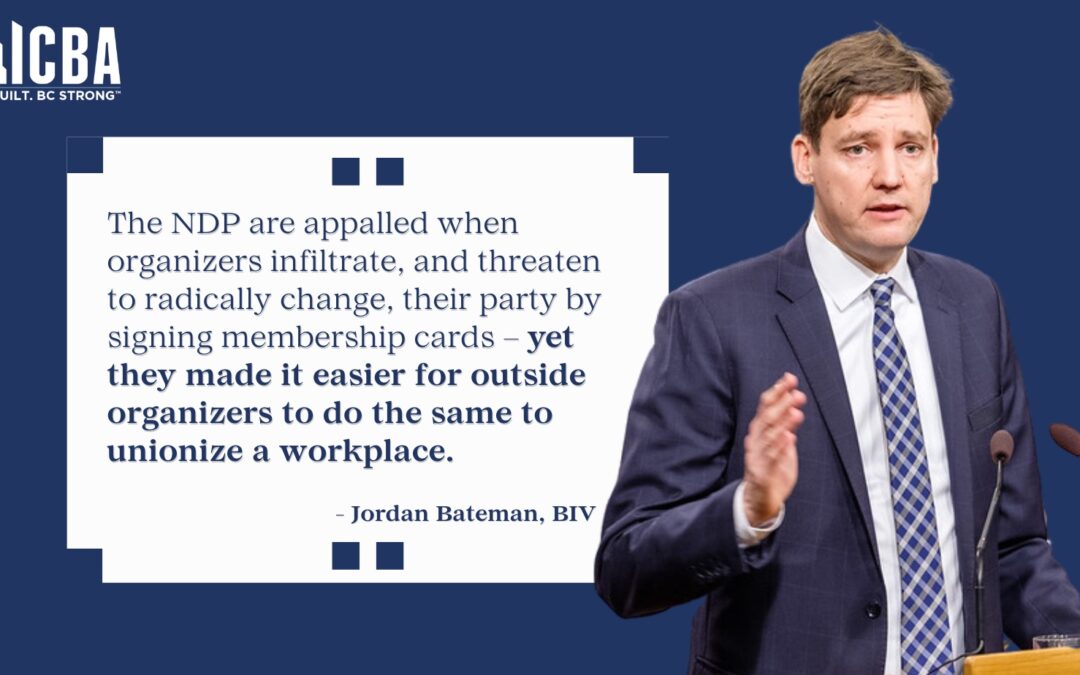 The following op-ed by ICBA VP-Communications Jordan Bateman first appeared in Business in Vancouver and The Orca Oct. 12, 2022.

TL;DR — The NDP are appalled when organizers infiltrate, and threaten to radically change, their party by signing membership cards – yet they made it easier for outside organizers to do the same to unionize a workplace.

Hypocrisy has always run rampant in politics. But as they work to oust upstart leadership candidate Anjali Appadurai and hand over the reins of government to their preferred choice, David Eby, the BC NDP is taking it to a whole other level.

There is the hypocrisy of calling yourselves “New Democrats,” but then working behind closed doors to stop a leadership vote from ever happening.

There is the hypocrisy of claiming to be a grassroots movement, but then mowing down those grassroots for daring to want the government to change directions. And disenfranchising them after allowing your party membership to wither down to the diehards.

There is the hypocrisy of touting a candidate equity policy, and then exempting the leadership race from it – and working day and night to make sure your chosen white man has an easy path into the Premier’s Office to replace another white man (who also had an unopposed path to leading the party, after it tore down its most successful female leader). This time, they’re doing it by ousting the female person of colour before a single ballot is ever cast.

There is the hypocrisy of begging the BC Greens to trust you with their confidential party membership lists, after you stabbed them in the back and tore up the Confidence and Supply Agreement to win an election.

And then there’s what I believe is the most outrageous hypocrisy: NDP brass are appalled when organizers infiltrate, and threaten to radically change, their party by signing membership cards – yet they made it easier for outside organizers to do the same to unionize a workplace.

Earlier this year, without consultation with employers, the BC NDP threw out two decades of B.C. labour law and stripped workers of the fundamental democratic right to a secret ballot, all so outside forces could have the advantage and more easily unionize a workplace.

Now, in the BC NDP leadership race, Appadurai and her allies have found thousands of individuals willing to sign cards and plunk down a few bucks. Instead of embracing it, as they do the union movement, the NDP power brokers are set to disqualify Appadurai and disenfranchise thousands of NDP members.

In one case, they’re ignoring the rules. In the other, they changed them. In both cases, the NDP did it to engineer the outcome they believe benefits them. That’s why there has been studious silence when the Steelworkers Union encouraged members of other parties to join the NDP and support Eby – exactly what Appadurai is accused of. The BC NDP leadership doesn’t seem to mind the tactic when it’s for their chosen candidate.

The rest of us can just call it “hypocrisy.”