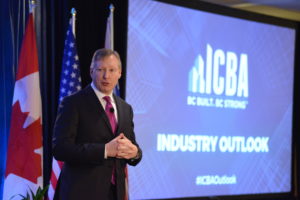 The BC Liberal Party’s plan to overturn the City of Vancouver’s natural gas ban is good news for both Vancouver residents and the thousands of people who work in BC’s oil and gas industry, the Independent Contractors and Businesses Association of British Columbia said today.

“By using regulation and legislation to ban natural gas, Gregor Robertson is not only increasing heating costs for both renters and homeowners, but also, he is putting good jobs across BC at risk,” said Chris Gardner, President, ICBA. “This is an important provincial issue that all parties should take a position on. Vancouverites deserve to know who cares about energy affordability, and natural gas workers in the north deserve to know who supports their jobs.”

Earlier this year, the ICBA merged with Energy Services BC, the largest oil and gas industry association in BC. Supporting responsible resource development and growing BC’s natural gas industry is an important focus for the ICBA and its members.

“British Columbians need leaders who are committed to getting to “yes” on job-creating infrastructure and energy projects, not ones looking to mothball clean, viable natural gas and put roadblocks in the of the kind of investment our province needs to grow,” said Gardner.