VANCOUVER, B.C.: With 2,252 jobs hanging in the balance, the Independent Contractors and Businesses Association (ICBA) launched a public campaign today to push the NDP-Green alliance to #Get2Yes on the Site C dam. 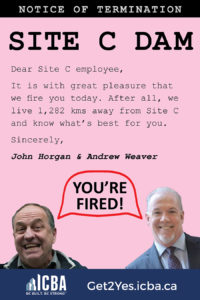 ICBA launched its campaign with a media event at BC Hydro’s Vancouver headquarters, using 2,252 Site C pink slips to illustrate how many people went to work this morning on the Peace River dam site. It is encouraging members of the public who support clean energy jobs to visit Get2Yes.icba.ca and send an email to B.C.’s three party leaders.

“In their power-sharing deal, John Horgan and Andrew Weaver agreed that Site C should be reviewed based on ‘current’ supply and demand metrics,” said Chris Gardner, ICBA President. “This stacks the deck against a project that isn’t being built for today, but to help meet B.C.’s electricity needs for the next century, and to offer a clean energy alternative to fossil fuels.”

“B.C. can’t simply throw away the $4 billion already spent on Site C,” said Jordan Bateman, ICBA Communications Director. “Taxpayers have made a significant investment in that clean energy project, one ratified by the people who live closest to it – the BC Liberal candidate won the Site C riding by 10 to 1 over the NDP.”

Site C spent more than a decade going through environmental assessments and regulatory reviews, and was signed off by both the federal and provincial governments – all of which was upheld by a unanimous decision of the B.C. Court of Appeal last fall.

In the coming weeks, ICBA will hold more #Get2Yes on Site C campaign events in Victoria and Fort St. John.

“The 2,252 men and women working on Site C today deserve our support as their jobs hang in the balance,” said Gardner. “When Horgan and Weaver talk about ‘yesterday’s economy,’ they demean the work of hundreds of thousands of British Columbians who put on a tool belt every morning and go about building our province.”