VICTORIA, B.C.: With 2,252 jobs hanging in the balance, the Independent Contractors and Businesses Association (ICBA) took flight at the Throne Speech today. A plane towing a banner saying, “BC NEEDS SITE C JOBS” flew around the B.C. Legislature from 12:15 to 2:45 p.m. as the Throne Speech ceremonies took place below. 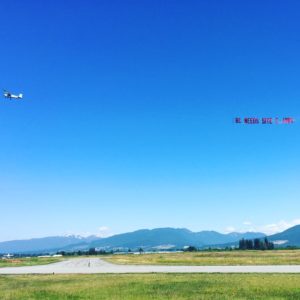 “It’s important that we take every opportunity to remind the 41 NDP and 3 Green MLAs who may form government in a few weeks, that 2,252 real people went to work at the Site C dam site this morning,” said Chris Gardner, ICBA President. “While those construction workers are building our clean energy future, their jobs are being threatened by John Horgan and Andrew Weaver’s commitment to cancel for the project.”

ICBA launched its #Get2Yes on Site C campaign with a media event at BC Hydro’s Vancouver headquarters on June 8, using 2,252 Site C pink slips to illustrate how many people work on the Peace River dam site and who are risk of being fired.

ICBA is encouraging people who support clean energy jobs to visit Get2Yes.icba.ca and send an email to B.C.’s three party leaders. In the first week of the campaign, nearly 2,000 people have sent an email supporting Site C.

“Our Site C pink slip campaign has captured a lot of attention – one post was shared nearly 3,500 times on Facebook, with a quarter million people seeing it,” said Jordan Bateman, ICBA Communications Director. “With $4 billion already spent and committed, the people of B.C. see the value in allowing thousands of construction workers to finish Site C – it would be irresponsible to do otherwise.”

Site C was more than a decade in the planning, has undergone extensive environmental assessments and regulatory reviews, and was signed off by both the federal and provincial governments. Both the process and project have been upheld in nine different judicial reviews in the BC Supreme Court, the BC Court of Appeal and the Federal Court of Canada.

ICBA is concerned that the message the NDP and the Green MLAs are sending is that even if a project is approved in B.C. and even if you are more than 20% complete, it doesn’t matter, the government can still change its mind and cancel a project. “John Horgan and Andrew Weaver will ruin B.C.’s reputation as a good place to invest, putting us on a level no different than third world countries where assets are seized and projects are cancelled on a whim,” said Gardner.

In the coming weeks, ICBA will hold more #Get2Yes on Site C campaign events in Victoria and Fort St. John.

“We’re going to keep fighting for the men and women working on Site C and other construction projects around B.C.,” said Gardner. “These jobs put food on the table for many families and they deserve the support of the NDP-Green MLAs.”