Business in Vancouver has a profile on new ICBA President Chris Gardner, including a look at how he went from Langley, B.C., to Seoul, South Korea, and back to the Lower Mainland:

When he graduated in 1991 mutual friends reconnected him with Gene Macdonald, who had been his principal at Langley Secondary School. 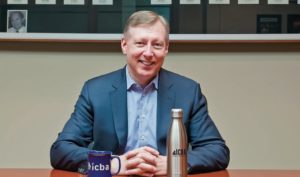 “We ended up touching base, and he was a very strong believer in travelling abroad, studying abroad, living abroad, working abroad,” Gardner said. “It was because of him that I went to Korea.”

Macdonald was cultivating an international student program in Langley, and a Time magazine cover story on the four Asian tigers – Singapore, Hong Kong, Taiwan and South Korea – caught Gardner’s attention. He set off for Seoul, arriving in time for the country’s first democratic elections. The zeitgeist was infectious, and one year became 11 as work with Lee & Ko, the country’s second-largest law firm, introduced him to his wife, and opportunities opened up in the head office of Samsung Electronics and then ING Investment Bank.

Gardner returned to B.C. in 2002 to establish a beachhead for a Korean company seeking to expand into North America. It made dial-up modems, but wireless was the future. A chance encounter in late 2005 with Britco co-founder David Taft at Milestones in South Surrey saw Gardner enter the construction sector in 2006. Gardner prepared a feasibility study for Taft and business partner Rick McClymont while at law school and they welcomed him back as vice-president of operations.

Gardner joined Civeo Canada Inc., a provider of work camps, in 2015. The resource sector’s downturn led to coffee with Phil Hochstein in late 2016 and, in January 2017, he was appointed ICBA vice-president, and a month later, president.

“He’s a very smart man. He’s very calm and reasoned. I always liked being in negotiations when he was on our side,” McClymont said. “I think he’ll bring a lot to the ICBA.”