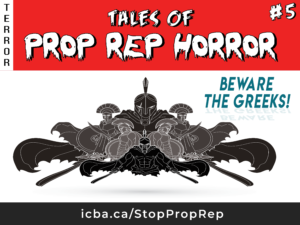 B.C. Prop Rep fanatics love to wave away the possibility of extremist, fringe parties every gaining seats in the B.C. Legislature.

But it’s a common occurrence in prop rep countries around the world. Take Greece, for example. The birthplace of democracy now has more than 10% of its parliament controlled by the ultranationalist, neo-Nazi Golden Dawn and the ultraleft Communist Party.

Golden Dawn uses swastikas, the Nazi salute, and such charming campaign slogans as, “So we can rid this land of filth.” They generally collect 6 or 7 per cent of the Greek vote, translating into 17-21 seats in the Hellenic Parliament.

Meanwhile, the Communist Party (also known as KKE), gets 5 to 8 per cent of the vote, and 11 to 26 seats. It has even managed to finagle its way into governing coalitions twice.

Prop rep offers no protection against extreme, fringe parties. Let’s not make the mistake Greece has.