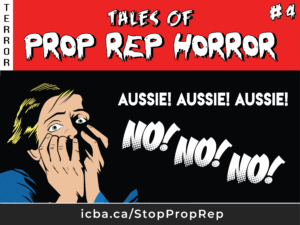 Prop rep Australia is a revolving door of governments and prime ministers. Five Prime Ministers in 11 years – with none making it to an election before being ousted by the coalitions they tried to form.

This is the great lie of the B.C. prop rep supporters: that somehow their system will magically render good, consensus-led governments. The opposite is true.

Australia is “a soap opera of political intrigue, with leaders nervously eyeing caucus rivals keen on mounting a challenge.” It took more than a week of backroom deals to sort out who won the 2016 election.

“Australian legislators have developed a taste for knifing rivals that would impress Roman emperors. Proportional representation inspires such feelings, given how a smattering of seats can nonetheless deliver great influence.”

Let’s keep this prop rep blunder down under – and not make the same mistake here in B.C.