Desjardins, one of Canada’s largest financial institutions, is about to turn its back on Canadian energy workers after being pressured by environmental activists in Canada, the U.S. and Europe.

Rather than buckle to activists who have no interest in a fair and honest debate on our energy resources, Desjardins should stand up for Canadian jobs, Canadian energy and decisions made in Canada that benefit all Canadians. This is important – please make your voice heard. Tell Desjardins 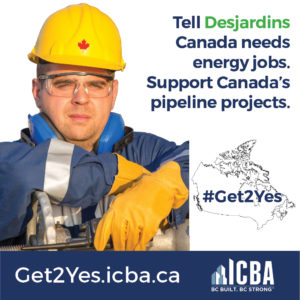 to support responsible resource development in Canada. CLICK HERE TO SEND AN EMAIL TO DESJARDINS’ CEO!

Desjardins, the biggest association of credit unions in Canada, announced recently that they are suspending lending to Kinder Morgan’s Trans Mountain pipeline and reviewing whether they’ll ever fund another pipeline project. This would impact projects like Enbridge’s Line 3, TransCanada’s Keystone XL project and TransCanada’s Energy East pipeline.

Desjardins appears to have given into activists who oppose the Canadian oil sands and other resource development projects in Canada. In a  letter that included the signatures of 11 American groups, plus three from Europe, there are  demonstrably false facts – that the oil sands are “massively destructive” (they aren’t), that the pipeline “abuses” Indigenous people (it doesn’t), that it will make our iconic orcas go extinct (it won’t), that the current pipeline has too many leaks already (they don’t), and that the Fraser River will be damaged (it won’t).

CLICK HERE TO SEND AN EMAIL TO DESJARDINS’ CEO!

Enough with the nonsense and lies and indeed the threats. It’s time for Canadians to push back. Kinder Morgan did the hard work to #Get2Yes –and now we need our governments and lenders to #Stick2Yes.

The National Energy Board undertook a 29-month independent review of the TMP and approved the project subject to Kinder Morgan meeting 157environmental and technical conditions during the construction and operation of the pipeline. Subsequently, the Government of Prime Minister Trudeau approved TMP as did the Province of British Columbia. The B.C. Government added another 37 conditions.

All Canadians can take comfort in not only the robust nature of the review of TMP but also in the 194 environmental and technical conditions imposed on Kinder Morgan by the Federal and Provincial governments.

The energy sector accounts for a significant part of Canada’s wealth and prosperity. More than 425,000 people support their families and communities by working in the oil and gas sector. The industry is the single largest private sector investor in Canada, forecast to invest $44 billion in 2017.

In addition, the energy sector annually contributes an estimated $15 billion to government revenues in the form of royalty payments, land payments and corporate and municipal taxes, ensuring all Canadians benefit from our responsible resource development.

It’s time for Desjardins and other financial institutions to stand up for Canadian jobs, Canadian energy and Canadian decision-making.

Make your voice heard – tell Desjardins to support responsible resource development in Canada and the men and women who depend on energy jobs to support their families and their communities.

CLICK HERE TO SEND AN EMAIL TO DESJARDINS’ CEO!