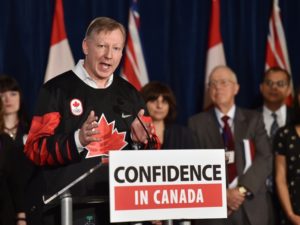 BURNABY – Premier John Horgan’s “double-down” today on his flawed, obstructionist, unfair attack on the duly-approved Trans Mountain pipeline expansion project is shaking investor confidence and showing the BC NDP Government has no interest in doing what’s right for Canada.

“B.C. has created a crisis of confidence and the implication is that Canada cannot get major projects approved and built,” said ICBA President Chris Gardner. “It is abundantly clear that the responsibility for this crisis we are facing today rests squarely at the feet of Premier John Horgan – he went to Ottawa and ‘doubled down’ on his obstructionist approach to the pipeline, rather than offer solutions to resolve the impasse.”

ICBA commended the federal government for convening today’s meeting between Prime Minister Justin Trudeau, Alberta Premier Rachel Notley and Premier Horgan in Ottawa, and is pleased that the Federal Government will assert its authority over this project to increase the chances of the project being built.

However, Premier Horgan’s comments that his government has every right to undo a project approval granted under a previous administration sets a very dangerous precedent that will further erode the confidence of investors seeking stability and certainty when looking to invest in BC.

“Prime Minister Trudeau’s statement today that Premier Horgan’s attempt to block the pipeline is the direct cause of this impasse is a stunning indictment on the actions of Premier Horgan,” said Gardner. “Premier Horgan is effectively ripping up a contract which Kinder Morgan negotiated in good faith with the federal and provincial governments of the day – that’s not how we must do business in Canada. It’s not right, it’s not fair, and it’s not legal.”

Kinder Morgan is prepared to invest $7.4 billion in our economy but Premier Horgan’s actions have forced the federal government to act in a way that means taxpayers could assume risk that a private sector investor was willing to undertake. “Canada is now basically saying that only governments can build major projects – and BC is saying we’re not interested in having private companies invest in our economy,” said Gardner. “This has profound implications beyond BC now – investor confidence in Canada is also being seriously undermined.”

More on our recent ICBA Wellness trip to Kamloops, where our Wellness ambassador Corey Hirsch Official spoke to several local groups. "It is not a position of weakness if you go get help… and we need to start talking to people." 👏 ... See MoreSee Less

While Hirsch’s hockey career was flourishing, he struggled with obsessive-compulsive disorder that went undiagnosed for years.
View on Facebook
· Share