VANCOUVER – B.C. construction workers should see pay raises of more than 10 per cent over the next two years, according to the results of the Independent Contractors and Businesses Association’s (ICBA) 2019 Wage and Benefits Survey. But there is a sense that storm clouds are gathering on the horizon for this vitally-important industry. 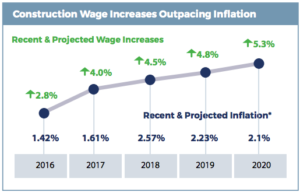 “The state of construction in B.C. is strong with just over half our companies expecting more work in 2019 than the year before,” said Gardner. “The industry is firing on all cylinders and then some.”

Construction in B.C. now employs nearly 250,000 people and contributes almost 9 per cent of the provincial GDP. This year, survey respondents said they expect to give their workers a 4.8% raise; in 2020, they expect another 5.3% increase. That’s more than double the rate of inflation.

“Worker shortages are not a problem unique to construction – retail, food, tourism and many other industries are experiencing things as the B.C. workforce ages,” said Gardner. “This demographic cliff is partly why construction continues to be an exciting and appealing career for a quarter million British Columbians – there is plenty of work, and good workers are being well-paid, well-trained and well-rewarded.”

But construction company owners are worried about the direction the B.C. Government is taking the economy. Of those surveyed, only 8% said John Horgan’s NDP government was on the right track in dealing with businesses like theirs. More than half – 51% – said Horgan was on the wrong track, while another 41% said they didn’t know.

“The NDP government is actively discriminating against 85% of construction workers in B.C. by forcing them to join a specially-selected union if they want to work on projects like the new Pattullo Bridge,” said Gardner. “Add in the NDP’s opposition to project likes Trans Mountain and the Massey Tunnel replacement; reams of new red tape; and $5.5 billion in tax hikes, and it’s no wonder so many job creators are worried about the direction B.C. is headed.”

For results of the 2019 ICBA Wage and Benefits Survey, including several infographics that can be used by media, click HERE.