VICTORIA, B.C. – The NDP Government is putting politics ahead of sound public policy by sending the Site C dam project to the B.C. Utilities Commission (BCUC) for a six-week review, said the Independent Contractors and Businesses Association (ICBA). 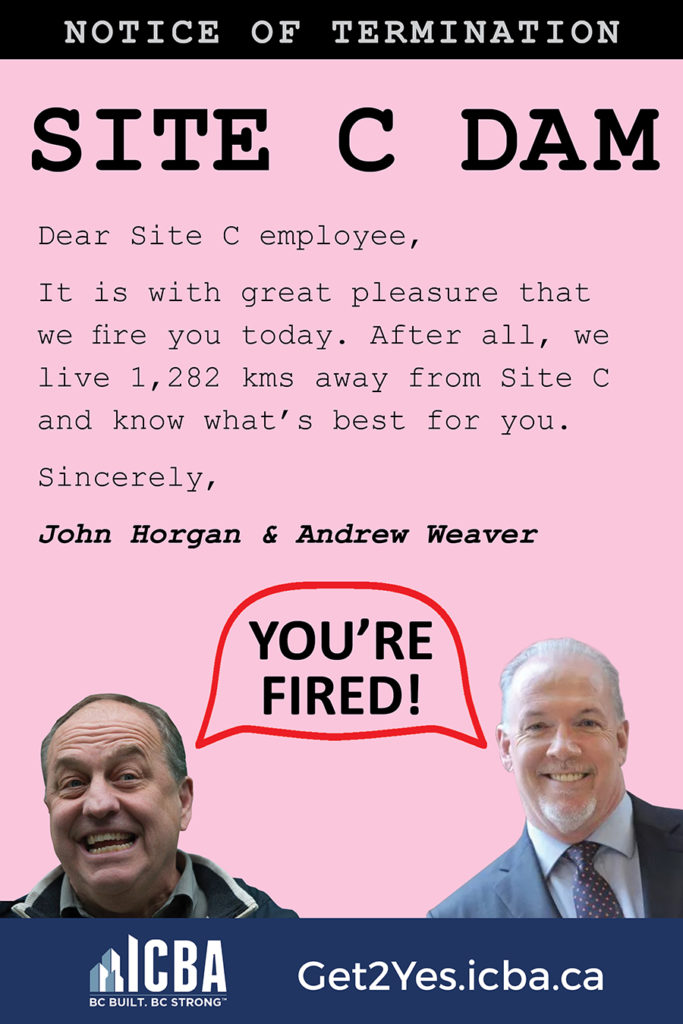 “Site C has already spent more than a decade going through independent environmental and regulatory reviews, with more than 150 binding environmental conditions imposed on the project. It was signed off by both the federal and provincial governments. Its environmental study alone was 29,000 pages – a stack of paper taller than an NBA basketball hoop,” said ICBA President Chris Gardner. “Site C has also faced 14 separate court actions and was upheld in every single one of them. At ICBA, we talk a lot about the need to ‘Get to Yes.’ On Site C, the NDP government needs to now ‘Stick to Yes.’”

NDP Energy Minister Michelle Mungall made the announcement today, calling on the BCUC to undertake a review of Site C and meet with stakeholders. ICBA intends to participate in that process.

“This review is redundant and irresponsible,” said ICBA Communications Director Jordan Bateman. “The focus should be on finishing the dam, not slowing it or stopping it. With 20 per cent of the work complete, and billions spent or committed, we need to finish the job. Judging Site C on ‘current’ demand – as outlined in the NDP-Green agreement – makes no sense given that demand in B.C. is expected to grow by 40 per cent over the next 20 years.”

ICBA, voice of B.C.’s construction industry, has been fighting hard to keep Site C workers on the job. Today, more than 2,400 men and women went to work on Site C.

“Workers and families in Fort St. John and other communities across B.C. are on edge over the NDP government’s opposition to Site C,” said Gardner. “But it isn’t just the economic future of the Peace region at stake. This action sends a chilling message to businesses and investors who are learning that in B.C., environmental and government approvals are not worth the paper they are printed on. Businesses looking to expand or invest in B.C. need to know that once they have met all regulatory requirements they can move forward with certainty and not have to worry about government changing its mind and reversing course.”

In recent weeks, ICBA has fought for Site C through its pink slip campaign, its poster campaign in Fort St. John, hiring a plane to tow a pro-Site C banner over the Throne Speech in Victoria, generating nearly 2,600 emails in support of Site C through www.get2yes.icba.ca, and releasing a list of B.C. cities where Site C workers hail from.