VANCOUVER – B.C. construction workers should see pay raises of nearly 10 per cent over the next two years, according to the results of the Independent Contractors and Businesses Association’s (ICBA) 2018 Wage and Benefits Survey. But it’s still getting tougher and tougher for companies to find skilled workers. 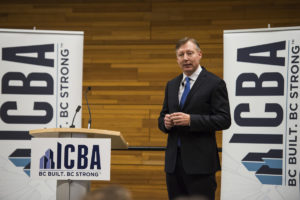 “With such strong demand for workers, construction wages are growing more than twice as fast as inflation,” said Gardner. “The need is intense. Every single glass company we surveyed this year said they needed more glaziers. For pipefitting companies, 93% said they needed more help; sheet metal workers, 91%; electricians and plumbers, 89%. The message is clear: if you want to work in construction, there’s a job out there for you.”

Construction in B.C. now employs more than 225,000 people and contributes nearly 10 per cent of the provincial GDP. This year, survey respondents said they expect to give their workers a 4.5% raise; in 2019, they expect another 5.1% increase.

The ICBA Wage and Benefits Survey also looks regionally at how optimistic companies are about adding more work in 2018. Fully 96% of construction companies expect business in 2018 to be as strong or stronger than 2017:

“Our findings bode well for opportunities in construction and its $19 billion annual contribution to provincial GDP – as long as we can continue to get to and stay at ‘yes’ on major projects and otherwise maintain a competitive business climate,” said Gardner. “We must do more to attract investment into British Columbia, ensuring that we continue to build the infrastructure and harness our resources responsibly.”

For results of the 2018 ICBA Wage and Benefits Survey, including several infographics that can be used by media, click HERE.