FACT CHECK: When it comes to training numbers, unions love their fudge

The BC building trades unions aren’t exactly known for their efficiency or effectiveness, which is just another reason why they are losing market share (and having to rely on unfair monopolies being handed to them by their friends in the John Horgan NDP government).

In their annual report on training, they had some numbers that should make even the most ardent trade unionist pause.

The first number we’d like to point out is this:

That sounds great, doesn’t it? Of course, we know the truth – only 18% of all trades apprentices in BC are affiliated with any union, according to the BC Government’s numbers. Check out this graph: 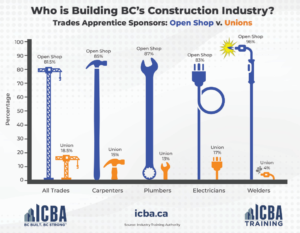 Indeed, according to the government’s official statistics, only 5,260 apprentices are sponsored by any union.

The building trades fudge their annual report number by including “trainees.” We don’t blame them – their numbers are so pitiful they need to spin them somehow.

(We would humbly point out that ICBA directly sponsors more than 1,200 apprentices and directly trains 4,000 people a year—and that doesn’t include the thousands and thousands of apprentices and others trained by our member companies.)

To train those 7,387 folks, the building trades claim this:

That 52 trainees per union staffer. Or an average of one trainee per paid staffer per week. Not much of a workload!

And guess what – that translates into unbelievable cost:

This is wildly inefficient and expensive. Union members should be asking their locals why it’s so bloody expensive to employ these trainers and to train these people.

Fun fact about ICBA: we have 5 full time staff dedicated to our 1,200+ apprentices, 4,000+ trainees, and helping our 2,000 member and client companies train their folks. And it’s not costing $150K+ per staffer to do this work. (We also contract instructors – experts in their fields – to do the hands-on training work.)

No one should ever cheap out on training or apprenticing. But the building trades seem a lot more concerned about sucking every dollar possible from their workers than they do in providing them with good value.