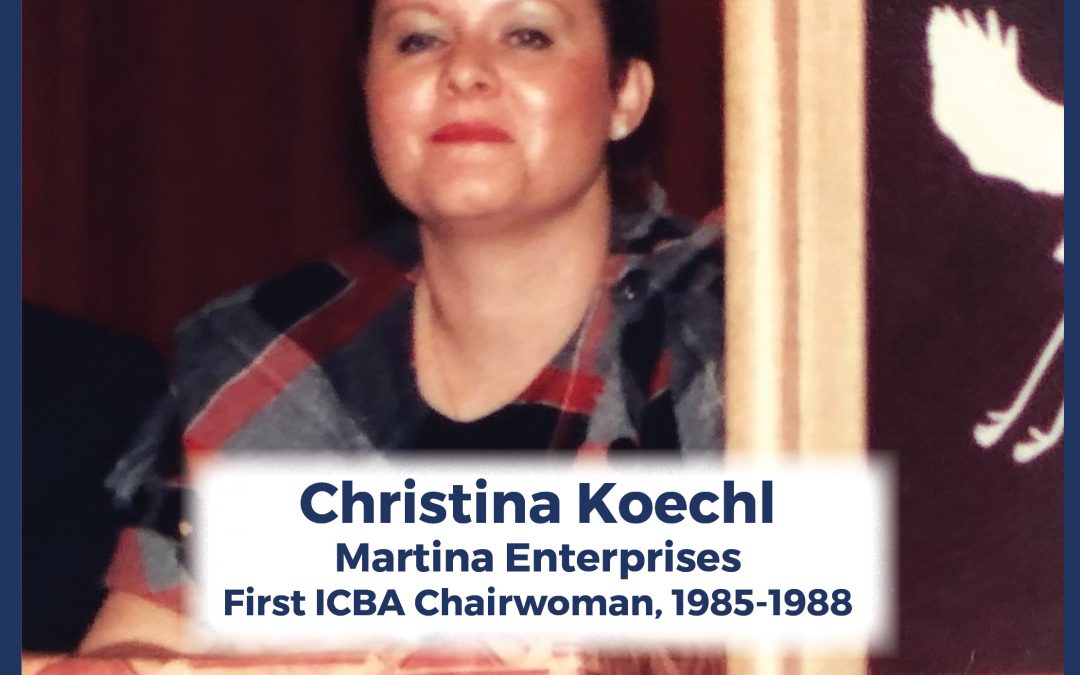 This year, ICBA is proud to support #WomenInConstructionWeek March 7-13, and highlight some of the amazing women who are building BC – and our association. Keep checking in here as we honour some of our construction pioneers and leaders. 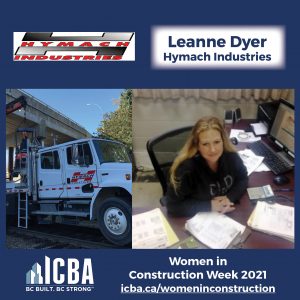 Leanne Dyer, operations manager of Hymach Industries Ltd., is our newest ICBA Board member, having been voted to the board in November 2020. Hymach specializes in bridge lifting, bearing remediation and heavy industrial construction including the maintenance, and structural repairs of bridges owned by CN Rail and SRY Rail Link.

Leanne keeps the business running – responsible for staffing, business direction, financials, advertising, and overseeing daily operations. She’s been with Hymach for more than 25 years, and is a great new voice at the ICBA board table. 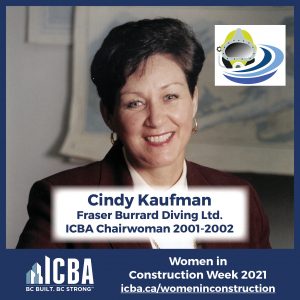 Cindy Kaufman of Fraser Burrard Diving Ltd. chaired the ICBA Board of Directors from 2001-02. Kaufman led ICBA during a pivotal time in our advocacy. The election of the BC Liberals in 2001 reversed the hostile labour conditions of successive, discredited NDP governments – returning fairness to government bidding practices. But it was more than just advocacy; Cindy legitimately cared about the people she was working with and representing.

In one meeting with Premier Gordon Campbell, she encouraged him to persevere during difficult times, even bringing him a book that had helped shape her own leadership. It was a touch of kindness and genuine humanity that politicians don’t usually see in meetings. ICBA’s former president, Phil Hochstein, remembers this being an important moment in the relationship between the association and the new premier.

Her company, Fraser Burrard Diving Ltd., was the perfect example of a construction company flourishing in a niche market – underwater building and pile driving. When she retired, the company was sold to its employees, a tribute to the succession planning and professional development she brought to the company. 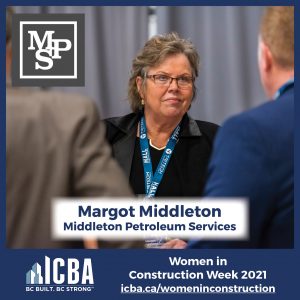 Margot Middleton, president of Middleton Petroleum Services, has served on the ICBA board of directors for more than two years.

Since 1987, Middleton Petroleum Services has provided fuel system installations and maintenance in Kamloops and across BC and Alberta. Their team is fully trained in all aspects of fuel system equipment maintenance, from diagnostics to repair and replacement, including tank monitoring systems and leak detection systems. MPS, under their newly branded Middleton Energy Services division, is also installing EV charging stations. MPS is a licensed electrical contractor, certified to install and service all major brands of equipment for every aspect of the retail and commercial fuel industry.

Margot is a powerhouse in her company, her community, and in BC construction! 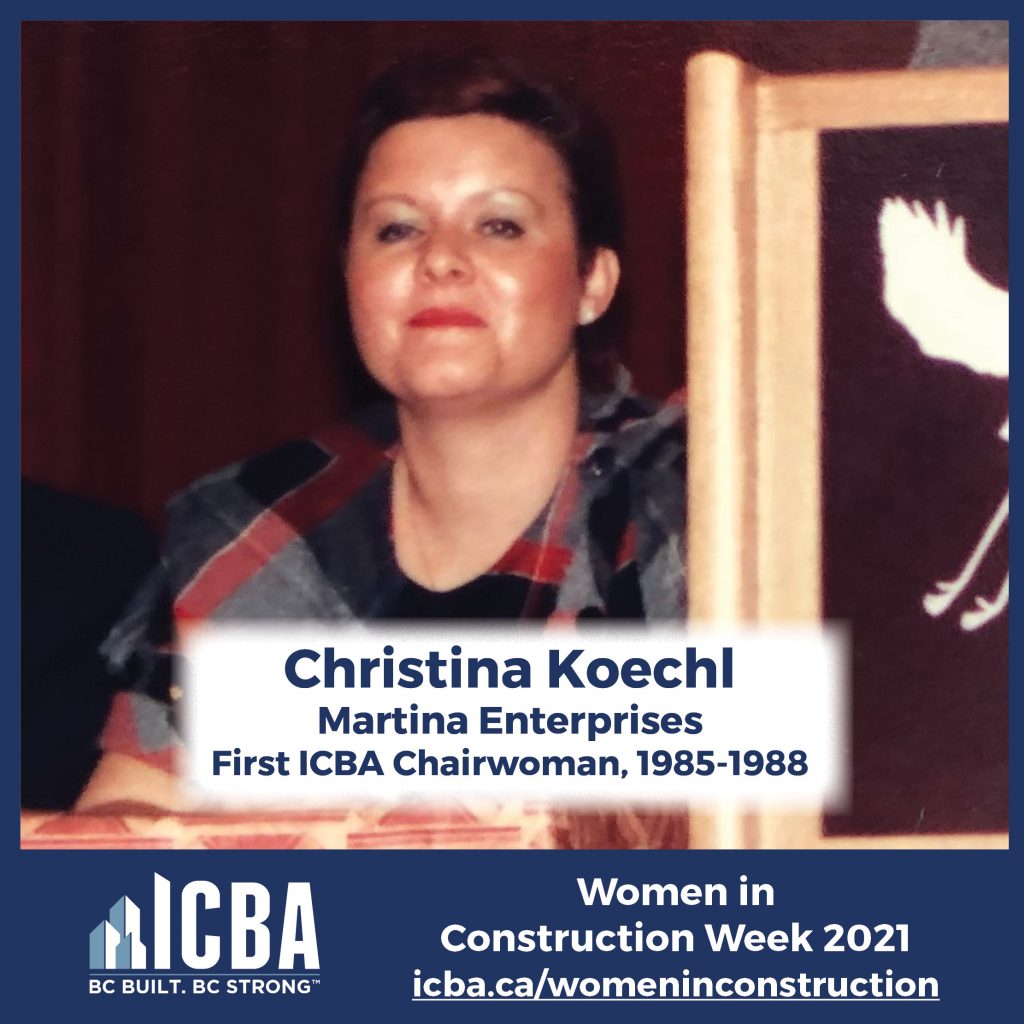 If not for Christina Koechl of Martina Enterprises, there may not be an ICBA today. The organization was struggling in the mid 1980s, until Christina took the chair of the ICBA Board of Directors from 1985-1988. Under her leadership, ICBA hired Phil Hochstein, won a major political battle in getting the open shop into EXPO 86 projects, signed up new members, and found financial stability. She was also the driving force in pushing ICBA to create a professional development program and directly train workers.

From a history of ICBA:

Two incidents helped shape Christina and Hermann Koechl’s resolve to operate non-union when they launched Martina Enterprises in 1972. The first was the relatively minor affront of being laughed at by a unionized contractor and told “you’ll never do more than a duplex, the unions will make sure of that.” The second was the much more chilling observation and advice of a union agent, passed along via Christina’s brother-in-law, that he “knew we had young kids and we should watch out for their safety.” The threat, she says, made her blood boil. And it drove her decision to become “part of a change, part of a movement,” and to take on a leadership role in the early ICBA.

The threat against her family was never acted on. But like those of other ICBA founders, Christina Koechl’s business faced huge hurdles. Suppliers refused to bid to it, its apprentices were denied study materials, and guard dogs and other extraordinary measures had to be taken to prevent vandalism at its work sites. In the end though, unions made sure of very little other than that Koechl’s resolve remained steely. “Give me a good fight any day,” she says. She and Hermann handled diverse and large mechanical contracting projects across North America – everything from multi-unit residential complexes, to a corporate head office, and an observatory in Hawaii. She also played an instrumental role in ICBA’s development, chairing its board and becoming a Life Member. But they faced some tough realities when starting out as an open shop contractor. 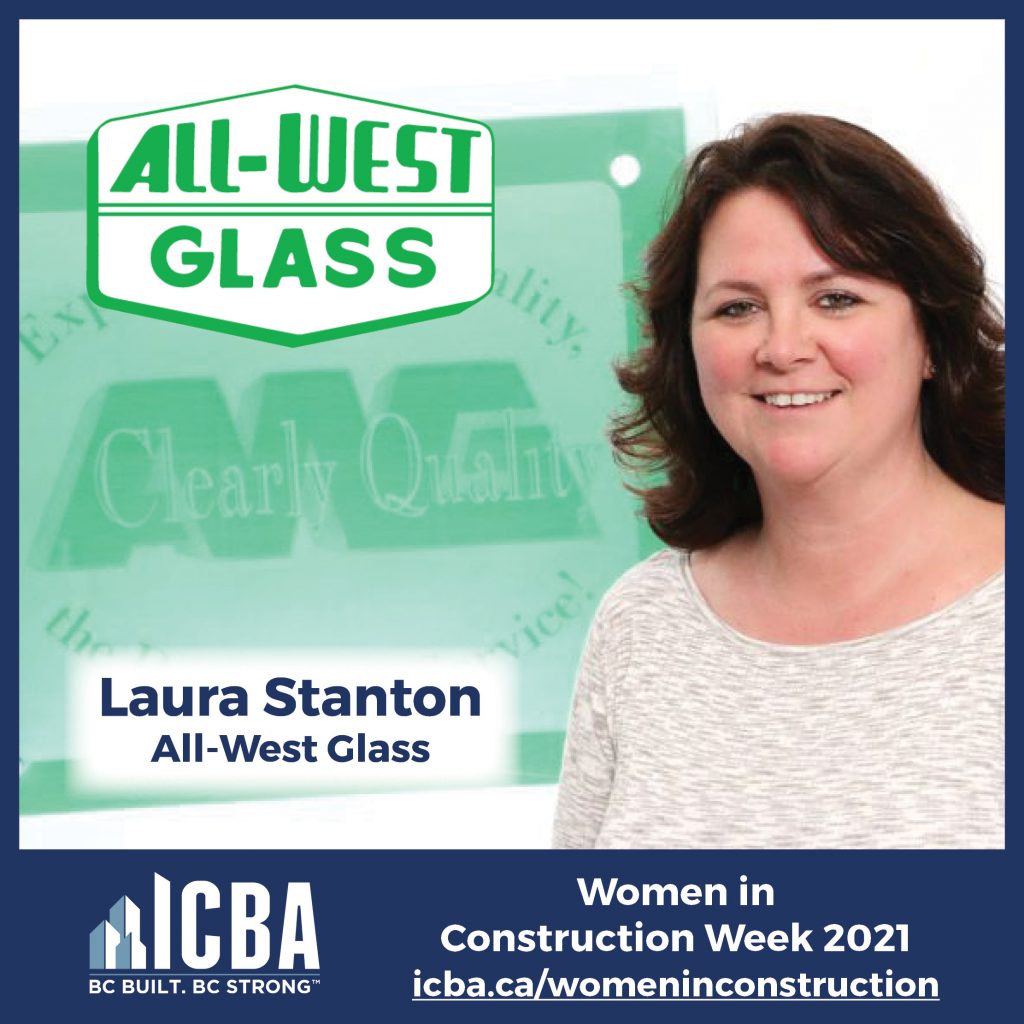 Laura Stanton has served on the ICBA board of directors for more than six years. She oversees the daily operations of four companies: Independent Glass Distributors, AWG Northern Distribution, AWG Windows & Doors and All-West Glass.

Laura is a phenomenal leader, and ICBA has benefited greatly from her work on our board. 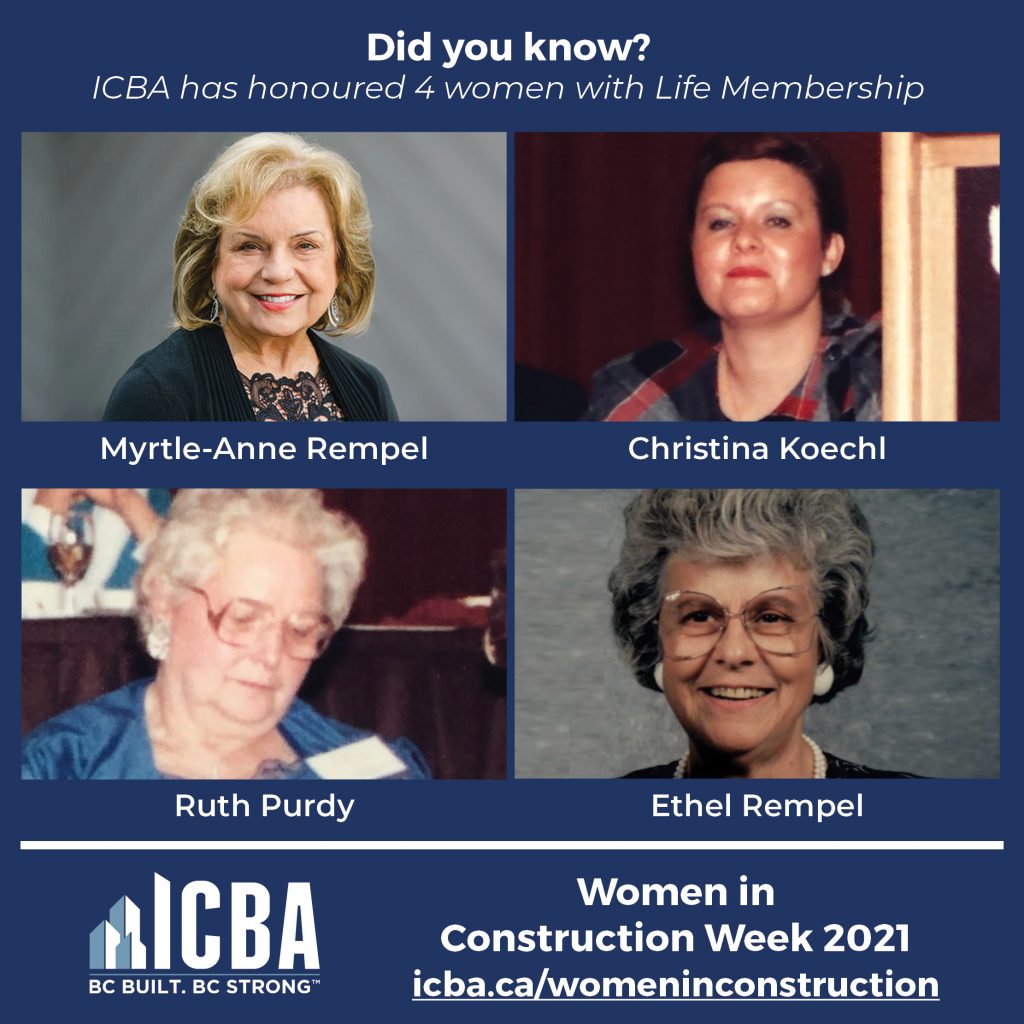 This #InternationalWomensDay (and #WomeninConstruction Week), ICBA recognizes both our history and our future. We’re proud to have four amazing women as life members (ICBA’s highest honour) in our organization:
We also want to highlight the future of women in construction – ICBA is proud to be the second-largest sponsor of women trade apprentices in BC. And we plan to be #1 soon.