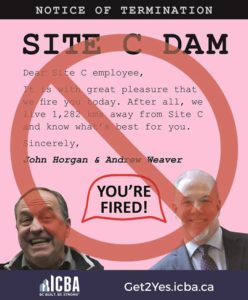 “With so much at stake for our province, better late than never for John Horgan and the NDP Government to support Site C,” said Chris Gardner, ICBA president. “This entire process and all of the uncertainty it caused was completely unnecessary. In the past four months, we have seen a rushed review and needless NDP-Green politicking create uncertainty and confusion that put this clean energy project, and the thousands of jobs it supports, at risk for no reason.”

ICBA launched a “pink slip” campaign to convince Premier Horgan to finish the Site C project and raise public awareness about the importance of Site C for B.C.’s clean energy future. Since the NDP and Greens signed their governing agreement promising a BCUC review, ICBA:

“We were proud to stand up for the workers at Site C, for BC Hydro ratepayers, and for all British Columbians who will benefit for generations from this clean, affordable, reliable energy supply of electricity,” said Gardner. Long before this latest review, Site C was one of the most scrutinized projects in B.C. history, and made sense both economically and environmentally. “Our message from the start of this process was clear: the review was unnecessary – finish Site C and keep building B.C.”

ICBA does have some concerns with Horgan’s plan. Arbitrarily setting apprentice and other workforce ratios will limit contractor flexibility and inevitably drive up costs and slow the construction schedule.

“By tilting the playing field in favour of the 20 per cent of the construction industry represented by the traditional Building Trades unions, the NDP is driving up costs to finish the dam,” said Gardner, noting that ICBA is the single-largest sponsor of construction apprentices in B.C. “Not only is this unfair to the 80 per cent of construction workers in B.C. not affiliated with an NDP-aligned union, any time you distort the market, erode competition, create more bureaucracy, and remove flexibility, it costs more. Unfortunately, the taxpayers of B.C. will be stuck with the bill.”