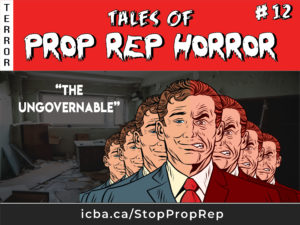 The Netherlands has 150 seats in its parliament, and 13 different parties are represented. This makes it near impossible to stitch together a coalition to govern.

B.C. would eventually go the same way under prop rep. You’d see the BC Liberal splinter into Liberals and Conservatives, and then social conservatives and fiscal conservatives. You’d see the NDP lose their green folks and then their private sector union supporters and the Greens lose their rabid eco-activists and their anti-everything people. There’d be regional parties – the north, Fraser Valley, Okanagan, Kootenays, and Vancouver Island. There’d be a Surrey party. There’d be the fringe parties – anti-immigration, anti-trade.

And before you knew it, B.C. too would be ungovernable.

Don’t believe us? It’s happening in prop rep democracies all over the world. Read it for yourself.